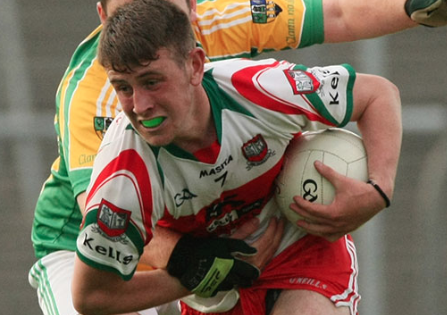 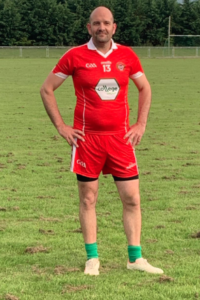 Gaeil Colmcille made the short trip to Moynalty for the final round of the JMB Sportsfield ‘B’ League Division 5. Gaeil Colmcille’s final spot already guaranteed after Kilbride’s win over Cortown the previous night.

With the final secured, everyone was out to impress the management of Justin Carry-Lynch and Timothy Reddy. “It’s hard to impress when you’re constantly shafted” muttered Tormey as he headed out with the number 24 on his back.

The visitors started the strongest and hit a goal inside the opening 4 minutes when Gary Arkins looked for the 1-2 off Gary McGovern, but McGovern said to himself “Ya score enough Arkins” and laid it off to Barry Balfe to palm to the back of the net. The goal reminiscent of the two the seniors scored the previous night but at about 27mph slower. Kells was dominating in midfield with Phili Ward plucking balls all over the field, while his partner in crime Mark ‘no breaking ball’ Fox was equally as dominant.

Balfe hit the next two points and it seemed that the criticism of the firefighters shooting from the O’Mahonys game was still in his head as he was on fire early on (no pun intended). Corner forward Gary McGovern who was the happiest man in Pairc Tailteann last night when he heard that Carry-Lynch passed a late fitness test, was showing well in the inside forward line and hit two scores on the bounce one with the right and one with the left.

Moynalty got on the scoreboard with two fine scores and cut the gap but you can only hold a good man down for so long and Arkins soon found his range when he pointed with the left and just before half-time rattled the back of the net to give Kells a commanding lead into half-time.

It was time to shine for the lads at the half-time show and the game of heads and volleys caught the eye of Carry-Lynch and with that, John Murray, Cuz Farrell, and Alan Tormey got the call for the second half.

Moynalty started well and hit three points in a row as they clawed their way back into the game. Arkins who was fresh from his warm-weather training camp on the Adriatic Sea nailed a point to keep Kells ahead in the game. The game could have been out of sight when Arkins bore down on goal and a simple handpass across the square to an unmarked Niall ‘Sugar’ Lynch could have sealed the game, but Arkins with his insatiable hunger for success took the shot on and it was well saved by the  Moynalty keeper. Sugar soon let Arkins have it and yelled “You’re nothing but a Chronicle man Arkins”

Justy, clearly upset that his buddy didn’t get the goal hauled Arkins off and replaced him with Eanna ‘One Eye’ Ryan for the remainder of the game. Moynalty were awarded a penalty and up stepped the Moynalty forward to dispatch to the bottom corner beyond the helpless James Flanagan (still a brother of Robbie’s) in the goal.

Carry-Lynch and Reddy used their wildcard with 10 minutes remaining bringing on Niall Flanagan into the full-forward line, luckily for Gaeil Colmcille there was spin classes or bank outings and with the sniff of a possibility of a medal, Flanagan was back. And like a fine wine Flanagan produced the score of the night with the final kick of the game, he picked the ball up on the village side and sold the Moynalty corner-back with the trademark dummy solo and struck with the left and as it sailed over the bar the corner-back considered retirement at the tender age of 18. It was another two points in the league for the Gaeils and they’ll now go on to face a Kilbride team that went through the league unbeaten and a record of 9 from 9. But this group of lads has proven time and time again that when their backs are to the wall is when they perform best.