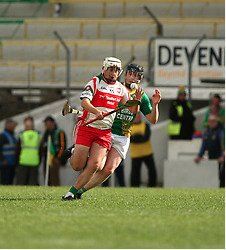 Gaeil Colmcille was hoping to go one better than 2018 as the started their Meath Hurling Intermediate campaign tonight in Athboy when the faced off against Drumree.

It took 8 minutes for the opening score of the evening when Fionn Ferguson, just recovering from his celebrations after picking up the Christy Ring the week earlier pointed from a free.

Wing forward James Hennigan followed up five minutes later with an excellent score from out near the sideline to increase Gaeil Colmcilles lead, Drumree replied with their first score on 16 minutes but when Dylan Roche and Ferguson scored within the space of one minute everything seemed to be going to plan for last years beaten finalists but Drumree rattled off 5 out of the next 6 scores to see them take the lead by the 24th minute. Ferguson’s fourth point of the half drew the Gaeils level but Drumree got the last two scores of the half to see them lead at the break 0-08 to 0-06

Kells relied on Ferguson for scores and straight from the throw-in the sliothar landed in Ferguson’s hand out on the left sideline and he pointed to leave the minimum between the sides. Three more points in a row from Ferguson after a Drumree point saw the Kells take the lead with 42 minutes on the clock.

Drumree drew level one minute later and in the 46th minute and arguably the changing point in the game, referee Gus Martyn seemed to blow for a throw-in inside the Kells penalty area and after discussions with his umpire he awarded Drumree a penalty, much to the bemusement of the Kells’ backs. Up stepped the Drumree player and fired beyond Charlie Usher in the Gaeil Colmcille nets. Drumree added a point soon after to extend the lead to four points heading into the final 10 minutes.

Substitute Darren Tormay pointed in the 55th minute and looked to have drawn the Gaeils level when he plucked a high ball from the sky and quickly turned and shot but for the Drumree keeper to pull off a wonderful save. If that blow wasn’t hard on Kells, from the resulting save the ball traveled the length of the pitch and ended up in the Kells net to secure Drumree’s win. Next up for Gaeil Colmcille in a what is must-win match will be Dunderry who themselves will also be looking for their first win of the championship.