The death has occurred of former Gaeil Colmcille and Meath footballer Joe Murphy peacefully at his home.

Joe a former publican and Undertaker right up to his death was one of the greats and arguably one of Gaeil Colmcille’s greatest ever players picking up two Meath Senior Football Championships in the late 60s defeating Kilbride in 1966 in a second replay after drawing twice 1-07 to 1-07 and 3-02 to 1-08 and eventually winning 0-08 to 0-06, 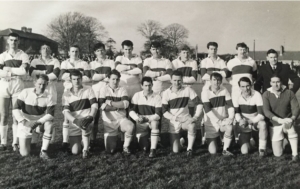 Two years later Joe was a Meath Senior Champion when he was apart of the team that comfortably beat Walterstown 3-17 to 1-04 in the 1968 final.

Joe lined out for Meath in the 1970 All-Ireland final at Full-Forward losing out to Kerry team that boasted the likes of Mick O’Connell, Jon O’Keefe and Dan Joe Crowley, with Kerry winning on the day 2-19 to 0-18 in the first ever 80 minute final.

In the same year in Leinster Football Championship,  Meath beat Carlow, Kildare and a strong Offaly side (that went on to win the 1971 All-Ireland) in the Leinster final by a single point in a high scoring 2-22 to 5-12 win, Joe scoring a 0-01 from full forward.

A question that was frequently asked in Kells “Who was the hardest man in Kells?” And the answer always was Joe Murphy the Undertaker, because when he put you down you stayed down. Well it will take a hard man to put the great Joe Murphy down.