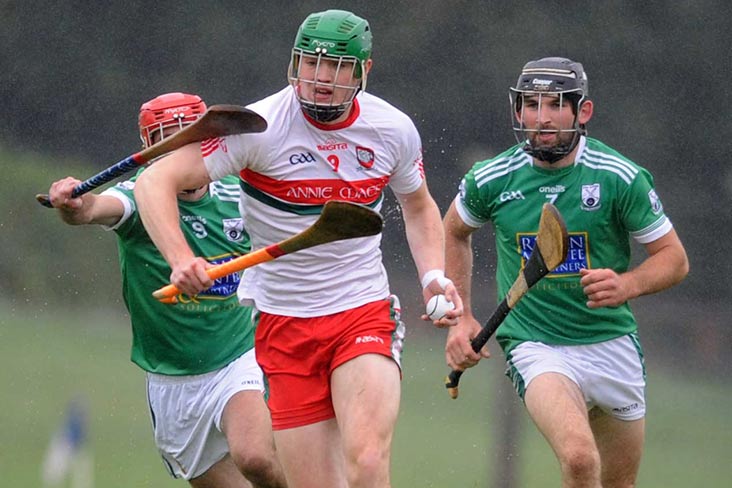 With Athboy unavailable due to a bereavement in the Clann na nGael club, Grangegodden was the venue for the Intermediate Hurling clash between Gaeil Colmcille and Kilskyre/Moylagh. With all three sides amalgamated at underage level it was a case of who would have the bragging rights at Adult level.

Gaeil Colmcille opened the scoring inside the first minute of the game thanks to Midfielder Evan Sheridan. Both sides traded scores with Kilskyre/Moylagh grabbing two scores to a Kells score from Cormac Martimoe. Kilskyre/Moylagh took the lead for the first time in the 5th minute with a free.

With 8 minutes played, Gaeil Colmcille pounced for the first goal of the game after the ball fell kindly to Conor Roche from a blocked shot from Sheridan and Roche made no mistake as he rifled to the roof of the net. Two pointed frees from Stephen Reddy stretched Kells lead to four points with 19 minutes played.

Kilskyre/Moylagh added two more points either side of a Reddy free and on 23 minutes Kilskyre/Moylagh were level when they found the back of the net beyond the helpless Gary McGovern. Kells responded excellently to the goal and hit the next three points in a row two from the stick of Reddy and a lovely score from Liam Ferguson out near the sideline.

Just before Half-time and Gaeil Colmcille were handed a massive boost after a scramble in the Kilskyre/Moylagh square the ball fell kindly to Shane Bennett who pulled on the ball into the back of the net leaving Kells six points to the good leading 2-08 to 1-05 at half-time.

A sluggish start to the second half as both sides missed frees and after a free scoring first half, it wasn’t until the 40th minute for the first score of the half when Kilskyre/Moylagh pointed from a free.

Four minutes later and Gaeil Colmcille were awarded a penalty by Referee Martin Dawson but a retaliation from the Kells player and Dawson overturned his decision and threw the ball in. From the throw in the ball fell kindly to  Cormac Mattimoe who restored Kells 6 point lead.

Three points in a row from Kilskyre/Moylagh left just a goal between the sides with under 10 minutes to go. A point from Sheridan kept two pucks between the sides. With three minutes to go and Kilskyre/Moylagh in search of a goal the ball fell kindly to the corner forward and he had one thing on his mind but his attempt at goal was excellently stopped as Gary McGovern dived low to his right hand side to save beyond the post.

Kilskyre/Moylagh scored the resulting 65 to set up a nervy finish. A blistering run from Evan Sheridan out of the backs ended up in him being fouled and Stephen Reddy scored what was the insurance point and seal a four point win to leave the Kells men sitting top of Group B after two games. Special note to a colossus of a man in Full-Back Mickey Foley who rolled back the years with a man of the match performance for the Kells men.