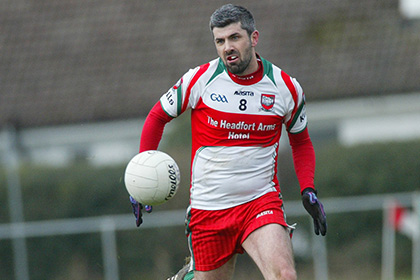 Gaeil Colmcille and Dunsany met in Kilmainham for the Quarter-Final of the Teach na Teamhrach Meath Junior Football Championship.

Dunsany exploded out of the blocks and Gaeil Colmcille couldn’t handle the lightening start which saw Dunsany race into a 1-04 to 0-00 lead after 16 minutes. Kells would have to wait until the 18th minute to get on the scoreboard thanks to a Stephen Reddy free kick. Two more points for Reddy reduced the gap to four points with less than 10 minutes of the half remaining.

Dunsany stayed composed and in the final third of the half the hit two more scores to no reply to see them take a 1-06 to 0-03 lead into half-time.

Corner-Forward Gary Arkins got Kells off to the perfect start when he pointed inside the opening minute of the half. But Dunsany responded by hitting the next two scores to increase their lead.

In the 39th minute Arkins got his second point of the game, this time from a free-kick but just as Kells gathered any momentum Dunsany kicked more scores, and two more in the 42nd and 43rd minute left the lead at 8 points.

Kells, now in search for goals had their chances and when Arkins took a quick free to Reddy who shot for goal from the 21 yard line but for his effort to go just wide. Danny McGovern also had an effort on goal but his left footed shot was blocked down, McGovern got in behind the Dunsany defence and as he ran along the end line his fisted pass to the back post was just too high for Reddy to meet.

Kells did score the next four points in a row with Arkins grabbing two points and Keith Reillys and Danny Muldoon goal attempts both just going over the crossbar left it 1-11 to 0-09 heading into injury time.

In the 61st minute, Dunsany killed the game off when they struck for their second goal and a consolation point from Arkins (his fifth of the day) wasn’t enough to halt Dunsany progressing to Semi-Final to take on Moylagh.