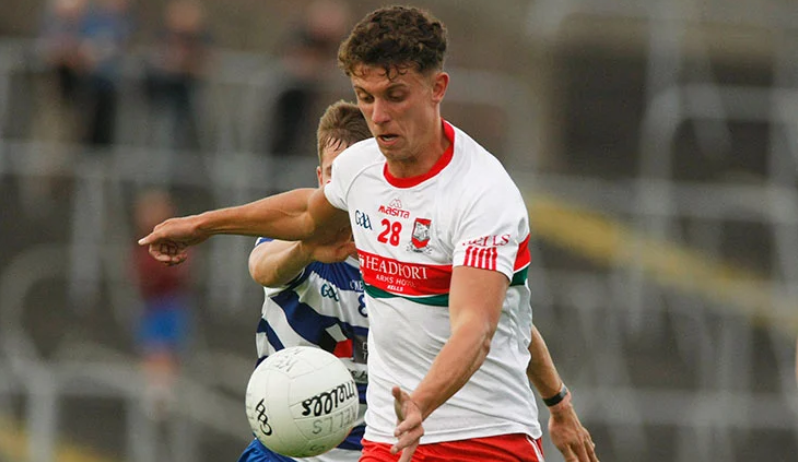 In what was such a great pity, only 110 tickets were up for purchase in what was one of the most entertaining games of football in recent years. Gaeil Colmcille and St. Peter’s, Dunboyne served up a fascinating game of end to end football.

The 2018 Keegan Cup winners came out with intent and could have scored a goal inside 30 seconds but for a world class save from Justin Carry-Lynch who saved high and out for a 45. Dunboyne did take an early lead 0-02 to 0-01 lead with five minutes played. Playing a high press on the Gaeil Colmcille kickouts, Dunboyne’s pressure and pace was causing the Kells men a lot of problems and hit four points in a row to take a commanding lead 0-06 to 0-01.

Kells looked for any kind of a score to settle their nerves and got it in the 17th minute when Seamus Mattimoe hit a monster free at the hospital end from right out on the terrace side. That point took both teams to the water break which Gaeil Colmcille were happily to take.

A quick score after the restart from Keith Reilly took Kells to with three points. The turning point of the first half came on 23 minutes when Evan Sheridan broke up a Dunboyne attack on the Kells endline and Gaeil Colmcille worked the ball up the pitch to Brian Hanlon who was left with just the keeper to beat and he did so with his left foot.

Two further points in a row, the first from Oisin Reilly and the second from Sheridan saw Kells take the lead for the first time. Dunboyne did manage to get the last score before the break and unbelievably Gaeil Colmcille took a 1-05 to 0-07 lead at Half-time.

In what can only be described as the perfect start to the half, Seamus Mattimoe beat his man to a ball into the forward line, Mattimoe did incredibly well to beat off his marker to lay off to the on rushing Oisin Reilly to fire to the back of the net.

Mattimoe got the next score after a majestic catch, called his mark and popped the ball over the bar. Fionn Reilly followed that up with a point of his own and with Kells now asserting all the pressure, Hanlon capitalised on a loose kickout and quick thinking played Reilly through for his second goal of the game to give Kells a commanding lead.

Dunboyne dug deep and clawed their way back into the game and score by acore they hit six in a row to see them get back to just within three points and they wouldn’t have been happy when Referee Cormac O’Reilly called for the second half water break as they had all the momentum.

In a brief water break, Lar Wall got his message and the Gaeil Colmcille substitutions made a big impact as Gaeil Colmcille defensively closed out the game as they held Dunboyne scoreless in the final quarter with Martin Barrett, Adam Muldoon, Ryan Farnham and Barry Smith all putting their stamp on the game. Midfielder Oisin Reilly got the insurance point for Gaeil Colmcille in the 57th minute to see Gaeil Colmcille move to the top of Group D ahead of their third round clash with Dunshaughlin.

Subs: M Barrett for K Reilly, A Muldoon for Quigley, R Farnham for Courtney, B Smith for Curran