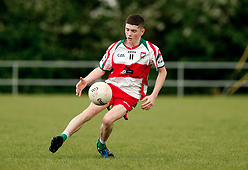 Gaeil Colmcille looked to make it two wins in as many games as they welcomed Na Fianna to Grangegodden for the second round of the LMFM Minor Summer League.

Gaeil Colmcille got the opening score of the match when wing-back Ryan O’Boyle attacked from the throw-up and the ball found its way to him out on the left side and he struck over with his left foot. Na Fianna replied two minutes later to level the scoring up.

Kells hit the next five scores in a row with Andrew Butler notching three points from play. Ajay Tormey added a point in between those scores of Butler’s and midfielder Cormac O’Reilly hit a lovely score on 25 minutes to see Kells lead stretch to 0-06 to 0-01.

Na Fianna had chances, dropping balls in and around the square but Darragh Smyth in the goals was dealing with the Na Fianna efforts with ease, Smyth who was covering for regular starter Thornton while he was on holidays.

The visitors did get the next point of the match but soon after Kells hit for the opening goal of the game, Luke Ronan played the ball into the forward line to Alex Williams and Williams laid the ball off to Tormey who finished to the bottom corner to leave Kells 1-06 to 0-02 ahead at half-time.

Na Fianna started the second half the stronger and hit the opening two scores to close the gap to five points. Full-Forward Williams steadied the Kells ship hitting a point in the 32nd minute followed by a goal five minutes later after good work from the tireless midfielder Sean Cleary played the ball to Paul Dowds, who laid the ball off to Williams to fire to the back of the net.

Na Fianna looked sure to score a goal when the forward was left one on one with the keeper but for Smyth to produce a fine save to deny the attacker.

Both sides shared the next four points with Butler scoring both of the Gaeil Colmcille points. Centre-Forward Luke Ronan hit the next score for Kells after his trademark dummy-solo off the right and his left foot strike sailed over the crossbar.

Butler hit his sixth and Gaeil Colmcille’s final score match as Na Fianna finished with a flurry scoring the final 1-02 of the match, the goal coming with the last kick of the match.