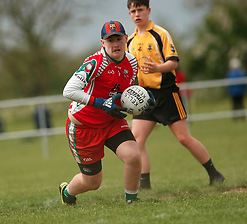 Gaeil Colmcille made the trip to Millbrook for the first round in Group-E of the LMFM Minor Football Summer League.

With Oldcastle not having the full contingent of 15 players, both sides started the game at 14 a-side. The home side got the scoreboard ticking when they slotted over the opening point of the match two minutes in.

A quickfire 1-01 from Gaeil Colmcille saw John Brady point and corner forward Paul Dowds to find the back of the net to see Kells take the lead. Both Sides hit two points each, Brady and an Alex Williams free pointing for the Kells men leaving them 1-03 to 0-03 ahead after 10 minutes.

Wing back Ryan O’Boyle hit the score of the half when he soared down the left sideline and hit a peach of a point with his left foot to extend Kells lead. Oldcastle kept in the game and notched over some lovely scores to keep the game tight heading into the closing stages of the half but on 24 minutes Williams struck for a goal to see Kells push ahead once more. Both sides traded a point apiece to leave Gaeil Colmcille ahead 2-06 to 0-08 at half-time.

Oldcastle made a blistering start to the second half and hit five scores without reply in an 8-minute spell to see the home side take the lead. A Luke Ronan free in the 41st minute steadied the Gaeil Colmcille ship but Oldcastle hit two frees in a row to regain the lead.

Cormac O’Reilly pointed on 45 minutes ahead of two scores in a row from Oldcastle seen them lead by three points. Credit to the Kells team the dug deep and with manager moving Full Back Fionn Smith to midfield Kells got reaped the rewards and on 51 minutes the sides were level when Williams scored his second goal of the game.

Kells, now pressing the Oldcastle keepers kick-outs, Brady gathered the next kick out and played in Ronan who pointed the first of four points in a row for the Centre half-forward. Oldcastle pushed for goals late on and hit two points in a row to get within two of Kells.

Any chance of a late comeback was forgotten when Brady pointed in the 61st minute and Gaeil Colmcille made sure of the win when substitute Andrew Butler fired to the back of the net to give the Gaeils their first points of the summer league,