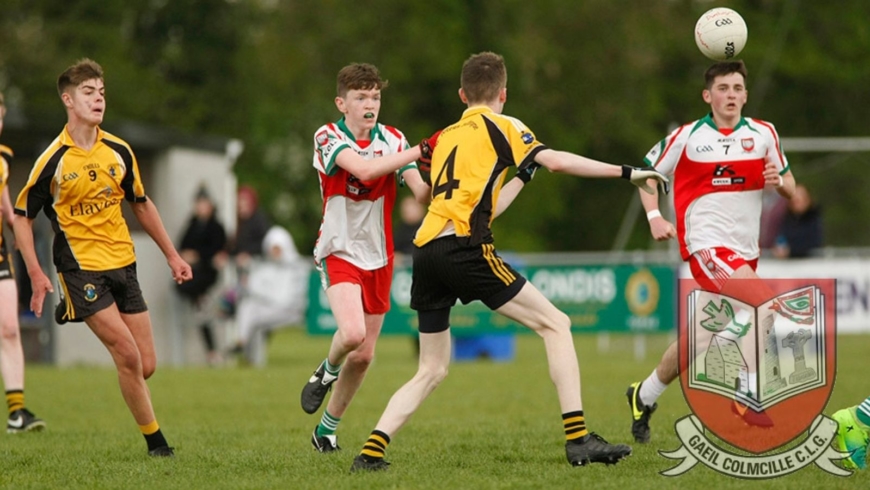 Going into the game Gaeil Colmcille knew the O’Mahony’s dangerman would be corner-forward Jack McConnell after his 1-12 against Simonstown the week previous and the reports were true as McConnell got the opening two points of the game. Gaeil Colmcille steadied the ship and Ajay Tormey pointed in the third minute to get Kells men on the scoreboard and Andrew Butler followed that one minute later to draw the sides level.

Gaeil Colmcille had two goal chances in a row from Tormey and Jack Hogg but failed to punish the O’Mahony’s defence and to make matters worse two pointed frees from McConnell saw O’Mahony’s go two points clear with ten minutes played. Hogg had another glorious chance for a goal after good interlinking play saw Hogg one on one with the O’Mahony’s keeper but he pulled his shot just wide of the upright. Andrew Butler got his second point of the game in the 10th minute to bring the minimum between the sides.

A four minute spell by O’Mahony’s saw them punish Kells for their missed goal chances as they struck for 2-01 to see the Navan men move eight points clear leading 2-05 to 0-03 at the first half water break.

Gaeil Colmcille responded well after the water break and two pointed frees from Butler cut the lead and when Sean Thornton got in behind the O’Mahony’s defence, a goal was on the cards but his left footed strike was blazed over the bar for another point for Kells. From the resulting kick out Butler stole possession and slotted the ball over the bar to bring just four between the sides.

Both sides shared the next four points, Tormey adding a free with a well hit strike from the sideline and Butler getting his sixth point of the half to see Kells trail at half-time 2-07 to 0-09.

Gaeil Colmcille got off to the perfect start when Butler pointed in the 32nd minute after good work from Liam Barry and four minutes later Kells found the back of the net for the first times despite many efforts in the first half, good work from Hogg in the corner, and he battled his way out of trouble and laid the ball off to David Butler, Butler withstood a heavy hit and done well not to be put over the end line and a fisted pass across the square was met when Thornton rose highest to palm into the back of the net to level the scores up on the night.

A personal change on marking duties saw Kristapus Vitkausus take up the responsibilities of marking McConnell and Vitkausus marshalling curtailed the O’Mahony’s man early in the half. Vitkausus coudn’t prevent McConnell hitting over two frees as the Navan men regained the lead but on 40 minutes Gaeil Colmcille took the lead for the first time on fortuitous circumstances when a free from Tormey dropped short and looked to be gathered by the O’Mahony’s keeper, only for Andrew Butler to react quickest and slap the ball into the back of the net.

Again, O’Mahony’s looked to McConnell and two more points from his right boot saw Navan take a one point lead into the second half water break. Just like the first half, the water on board stood to Gaeil Colmcille and a left footed point from Tormey levelled things up. Gaeil Colmcille collected the kick out when wing back Rian Early gambled on a break and three quick passes through the hands from Early to Oisin O’Reilly, O’Reilly to Butler and Butler put Tormey through on goal and from the 14 yard line rifled the ball to the roof of the net to see Kells take a three point lead.

With the wind in their sails Kells pounced on Navan O’Mahony’s and two points in quick succession from the hard working Kevin Carpenter saw Gaeil Colmcille go five points up but the lead was cut back once again when O’Mahony’s struck for a lucky goal with a deflected shot on 54 minutes. That goal left two points between the sides and the game was poised for a dramatic end.

An off the ball foul on Jack Hogg which was seen by the referee gave Butler the opportunity to put a goal between the sides with 62 minutes played and he made no mistake. McConnell got his tenth point of the day and his seventh free and when he gathered the ball from the Kells kickout, he tore down on goal there was only one thing on his mind, as McConnell got inside the penalty area Vitkausus  did enough to shield him out and McConnells shot went high and off the post and wide and Gaeil Colmcille held on for the win to keep their semi-final hopes alive.