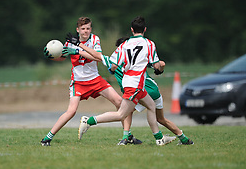 Gaeil Colmcille made the trip to Ballinlough Park in what was practically a semi-final in the LMFM Minor Football Summer League with the winner taking their place in the final against Bective/Dunsany.

Ballinlough, short on numbers could only field 11 players left the Kells management scratching their heads and having to leave close up to 13 lads on the sideline for the start of the game.

The home side started strongest and raced to a 0-04 to 0-00 lead with just 9 minutes played. A three-minute spell from Kells saw them take the lead by the 12th minute after Cormac O’Reilly struck to the back of the net with Fionn Smith and Jamie Jordan pointing also. Ballinlough got the next score of the game before the 15th-minute water break.

Kells had the lead twice more, in the 22nd minute when O’Reilly pointed and again in the 26th minute when Zak Griffin caught a long ball into the full-forward line and quickly turned and fired over the crossbar. Ballinlough closed out the half the strongest and hit two points in quick succession and in first-half injury-time found the back of the net for their first goal of the evening. A late point Smith saw the visitors trail by three points at half time with Ballinlough ahead 1-08 to 1-05.

A blistering second-half start by the home side saw them hit two goals inside the opening three minutes with a point in between to see their lead extend to 10 points. A Jamie Jordan free on 35 minutes  was quickly canceled out by another Ballinlough point and in the 10th minute Johnny Brady found the back of the net to crawl the Gaeils back into the game, five minutes later and Kells were awarded a penalty and it was excellently dispatched to the bottom corner by Griffin to leave just five between the sides and all momentum with Kells.

If it was small things that didn’t go Kells way, referee Paul Mooney called for a water break, killing Gaeil Colmcille’s momentum much to the relief of the Ballinlough players and management. The break clearly worked, as from the next kick out the ball was worked quickly up the pitch and the game killed off with a well-taken goal.

Substitute Michael Cahill scored a point late on but it would be Ballinlough who would go on to close the game out in good fashion and found the back of the net a couple more times to send them through to the Division E final against Bective/Dunsany.