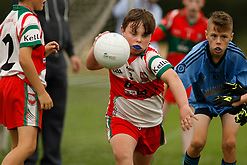 Gaeil Colmcille knew that they would be heading into the game as underdogs and knew a good start was needed to topple this years Spring League Champions and that’s exactly what happened when Andrew Gormley struck over three frees to give Kells an early 0-03 to 0-00 lead.

St. Colmcille’s settled in and hit back with a well taken point. On 9 minutes the Seasiders would take the lead after their forward took a quick free to an unmarked player and he dispatched well to the bottom corner.

Credit to Kells it didn’t affect their game plan and responded with Gormley notching over another point and they regained the lead when corner forward Noah Boshell tapped over in the 16th minute. In an end to end game it would be Colmcille’s who would take the lead this time with two points in the 17th and 18th minute. Gaeil Colmcille got the next score of the game and easily the score of the half when the ball was worked up the field and landed with Centre-Forward Tiernan Anderson who struck beautifully from 35 yards out to tie the game up. As the game looked to be going in tied at the break, Colmcille’s scored a point just on the stroke of half-time to give them the advantage of 1-4 to 0-06 at the break. Notable mention on the day to Harry Flanagan who was missing out due to being away at the Gaeltacht after his 1-01 over Donaghmore/Ashbourne helped the Gaeils to the final.

Gaeil Colmcille started the second half the same way they started the first with Gormley slotting over a free to bring the teams level once more. Two minutes later and Kells were in front after a Liam Barry free dropped short but midfielder Jack Hogg rose above all to punch to the back of the net.

The goal seemed to spur St. Colmcille’s to life and in a seven minute blitz they hit 2-04 without reply and grabbing a firm hold on the game. Gormley added another point for Kells in the 38th minute to reduce the gap to six points but Colmcille’s killed the game off hitting another 1-04 as the game headed towards the final whistle. Gaeil Colmcille did manage to get the final score of the game when substitute Mickey Dunne gathered the ball inside and penalty area and bravely struck over with the Colmcille’s keeper bearing down on him.

St. Colmcille’s ran out 13 points but great experience for our lads to be mixing it with the best in the County. No doubt their day will come and the lads are improving all the time. After already this year losing out in the Féile qualifiers Final, the Spring League Semi-Final and now the Summer League Final, this will hopefully set the lads up for a strong Championship campaign next month.