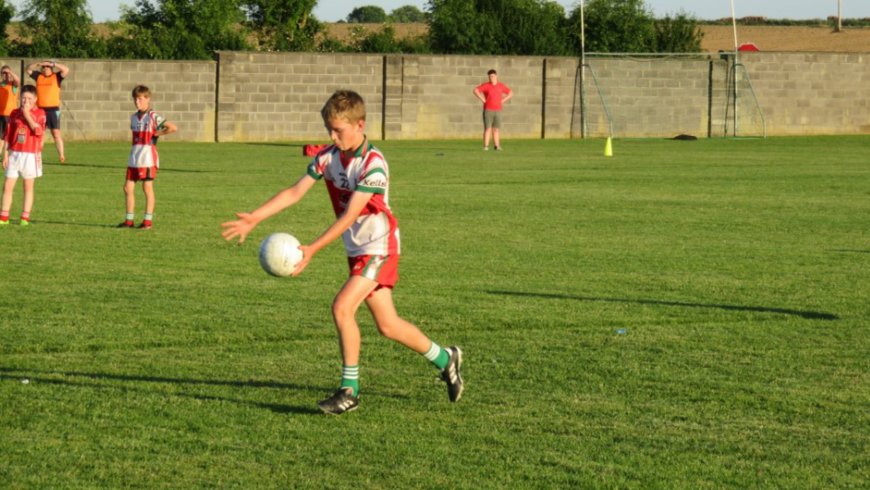 Despite a gallant second half showing, Gaeil Colmcille found Seneschalstown too string in the second round of the Paddy O’Brien Cup Division 1 tie played in Grangegodden.

Gaeil Colmcille’s discipline cost them in the opening twelve minutes as Seneschalstown registered four points all from frees to lead 0-04 0-00. Two more points from play extended the lead to six points as Gaeil Colmcille struggled to get a hold of the game.

It took Kells until the 15th minute to get on the scoreboard and corner back Liam Barry got on the end of a good move and despite an opening for a goal chance he blasted over. Gaeil Colmcille were unlucky not to find the net on 18 minutes after a high ball in dropped in the square and corner forward Byron Wearen rose highest but his palmed effort came off the crossbar and fell to safety much to the relief of the Seneschalstown keeper.

Just as Gaeil Colmcille were asserting themselves in the game Seneschalstown struck with two points either side of a goal to push 10 points clear in the game. Good work from corner back Aaron Glynn found Oisin O’Reilly who pointed to leave Seneschalstown 1-08 to 0-02 ahead at Half-Time.

The break helped Gaeil Colmcille to regroup and hit the first two scores of the second half with Andrew Gormley pointing from a free and Kilian Kelly pointing in the 33rd minute. All the early good work was undone in the 36th minute after Seneschalstown pointed from a free kick and from the resulting kickout the Yellow Furze lads scored their second goal of the game.

Despite suffering the body blow, Gaeil Colmcille never let their heads drop and got the next score of the game thanks to another Gormley free. Seneschalstown did match that score to go into the water break with a commanding lead. The water break helped the home side as they went on to outscore Seneschalstown by six points to one with Andrew Gormley accounting for five of those scores and brother John getting the other score to leave six points between the sides as the referee blew for full time.