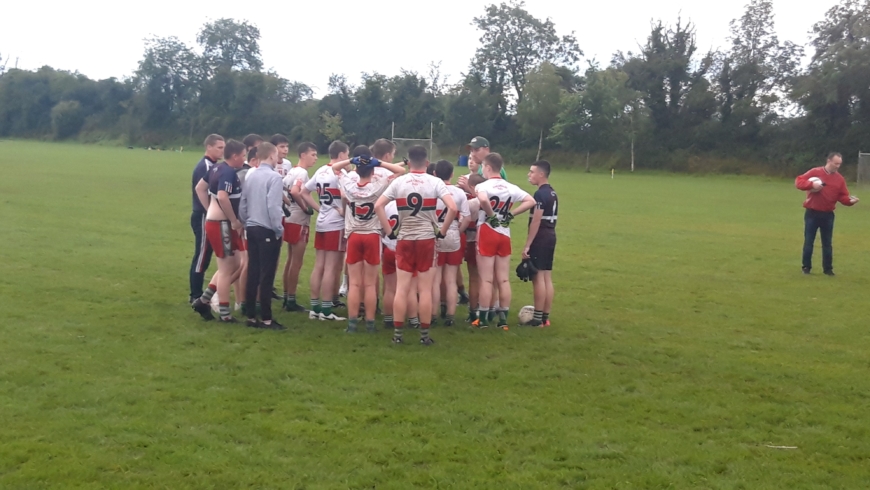 Leaving the glorious sunshine of Kells, Gaeil Colmcille made the trip to Sean Eiffe Park where Storm Ellen was setting as the rain tumbled down to face Ratoath in the U15 Paddy O’Brien Cup.

Despite the bad weather, scores were coming thick and fast, both sides traded the opening two scores with Oisin O’Reilly pointing for Gaeil Colmcille after good work from Corner-Forward Conall McGovern. Ratoath grabbed the first goal of the game on six minutes after good build up down the left side.

Gaeil Colmcille responded excellently to the goal as points from McGovern and two frees from Full-Forward Andrew Gormley drew the sides level. In a first quarter that ebbed and flowed, Ratoath got three of the next four scores one of which ended in the back of the Kells net for the second goal of the game, Kells did have a chance to get that goal back but Gormley failed to to score from a penalty just as the referee called for the first half water break.

The break for water helped Gaeil Colmcille and they hit the next four scores in a row which included a goal from Byron Wearen and points from O’Reilly and two more points from Andrew Gormley. That flurry left Kells two points clear as the first half headed in to injury time. There was still time for Ratoath to level things up as they hit two in a row to level the game up at 2-05 to 1-11.

Kells got the perfect start ti the second half when Andrew Gormley squared the ball to Jack Hogg who dispatched to the back of the net. Gormley then added a point in the 35th minute to stretch the lead to four points. In a highly entertaining game, within four minutes the sides were level once again as Ratoath scored a penalty and a free kick with 39 minutes played.

One minute later and Gaeil Colmcille scored their third goal of the game after a great move up the pitch, Oisin O’Reilly smashed home to give Kells the lead once more. Gaeil Colmcille goalkepper Glen Gavagan came to his teams recuse when he saved with his left foot to stop Ratoath pulling a goal back. No team seem to capitalize on their lead and Ratoath hit the next two scores before the water break to leave Gaeil Comcille ahead by one point going into the final quarter.

Out from the water break and Kells got their goal, a high ball into the square fell kindly to David Butler who struck with his left foot to see Kells lead by four. With both teams making mistakes it added to the excitement of the game and two monster scores from the Ratoath number 9 left just two between the sides and could have been worse only for the quick thinking of Jack Hogg to get back and save a quick free kick as it looked destined for the back of the net.

A pointed free for Ratoath in the 59th minute meant a nervy end to the game but Gaeil Colmcille’s solid defence held firm to ensure Kells took the two points on offer in a crucial game.