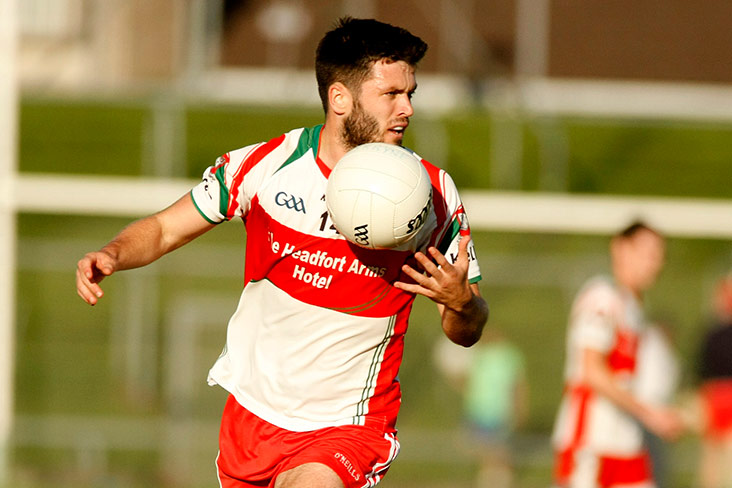 Gaeil Colmcille travelled to The Boyne Park to face Ballinabrackey in an all-important match for both sides to avoid the drop to Division 1B.

The home side got the opening score of the game thanks to a free from Damien Carroll. Brian Hanlon levelled things up for Gaeil Colmcille one minute later from a dead ball as well.

A Danny Quinn point for the Bracks was followed by an equalising score from Martin Barrett to leave the sides 0-02 each after a lively 8 minutes. The Gaeils saw some daylight between the sides in the 11th minute after Seamus Mattimoe pointed and Barrett found the back of the net after a smart pass from Seanie Curran to see Kells lead by 4.

Sean Coffey and Seamus Curry pulled Kells lead back to two points in a what was a high intensity opening half. Barrett added two more points and Mattimoe added another free, this was followed by a Oisin Reilly score and two Mattimoe frees to see Kells push eight clear with two minutes to go to half-time.

Damien Carroll finished the scoring in the first half to see Kells lead 1-09 to 0-05 at the interval.

Curry opened the scoring for the second half and from the resulting kickout, Sean Coffey found the back of the net to give Ballinabrackey the best start with less than a minute on the clock.

Three more points in a row from The Bracks, two frees, one from Damien Carroll and one from Danny Quinn either side of a David Carroll point saw the teams all square with 35 minutes on the clock. After trailing by eight points in the first half, Ballinabrackey found themselves in front in the 39th minute thanks to another point from Quinn in what was a remarkable turn around.

Credit to Kells they steadied themselves thanks to a fisted point by Evan Sheridan to bring the teams level once more. Damien Carroll put the hosts ahead once more from a placed ball but that was chalked off when Brian Hanlon scored arguable the point of the game having been shielded out on his left side, Beano struck beautifully to leave things 1-11 a piece with a quarter if the game to go.

Kells found themselves two points clear after a monster free from Hanlon near the sideline and a point from Seanie Curran meaning all six forwards got in the scoresheet. Damien Carroll pulled a score back for the Bracks one again from free kick but two more frees again from Beano saw Kells stretch three points clear going into injury-time. As Ballinabrackey went in search for an equalising goal, a Damien Carroll pointed free is all that could be got as the Referee blew for full-time in what was a highly entertaining end to end game. The win for Gaeil Colmcille sees them safe in Division 1A while unfortunately for The Bracks they’ll play in 1B for 2023.