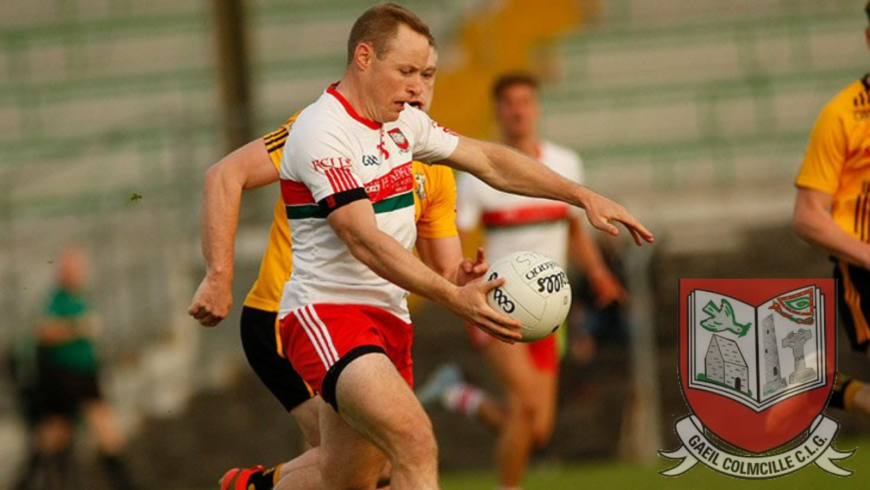 Gaeil Colmcille made the trip South to face Donaghmore/Ashbourne in the second round of the Division 1A A Leagues on the eve of St. Patrick’s Day.

Conditions were perfect for an evenings game of football and it was the home side who flew out of the blocks to get the opening score of the game with less than 15 seconds on the clock.

Danny McGovern cancelled the opening score in the second minute with a lovely turn and score to level things up early on. Three minutes later and a lung busting run from Seamus Mattimoe down the centre and his hard work was finished off when Daniel Farrelly took the ball off the shoulder to slot over and give Kells the lead.

Both sides traded points with Brian Hanlon pointing from a free kick leaving the score three points a piece with 16 minutes played. Two quick fire points from The Moores saw them take the lead with 10 minutes remaining in the half. Kells had Justin Carry-Lynch to thank for keeping the Moores men out with an excellent save shortly after but Donaghmore/Ashbourne did manage to get their sixth and final point of the half sandwiched between two Gaeil Colmcille scores with McGovern getting his second point of the match and Aaron Browne popping up from midfield to hit a beautiful score to leave The Gaeils trailing by the minimum 0-06 to 0-05.

Gaeil Colmcille started the second half without two starters after Paulie Tormay was forced off after 7 minutes injured and Oisin Reilly had to be taken off at Half-Time. Similar to the first half Donaghmore/Ashbourne got the opening score of the half and with 38 minutes on the clock the home side were awarded a penalty when James Reilly was penalised inside the Kells area, Carry-Lynch stood tall in the Kells nets and guessed correctly to keep out the spot kick. Kells grabbed the momentum and points from Martin Barrett point on 39 minutes and Kells were forced to make yet another substitute, this time Barry Tormay going off, but his replacement Ryan Farnham one minute later pointed and the sides were level.

Barry Farrelly who replaced Reilly got right in on the act and his trusty left boot stretched Kells two points clear after Hanlon had pointed a free one minute earlier. Another free by Hanlon in the 48th minute left the largest gap of the game with Gaeil Colmcille leading 0-10 to 0-07.

Kells had Carry-Lynch to thank once again for producing another fine save but as Donaghmore/Ashbourne continued to push for goals they got their reward in the 50th minute as they found the back of the net to tie the game up. Two points in a row followed for Donaghmore/Ashbourne and Kells had Carry-Lynch to thank amazingly once again as he made another top class save.

The Moore’s did get their second goal of the game in the 55th minute and this time the goalkeeper could do little about it as the Donaghmore/Ashbourne forward tapped into the net from less than one yard out. Gaeil Colmcille hit two of the final three scores of the game thanks to Hanlon but it would be Donaghmore/Ashbourne who kept the two points on offer in this second round fixture.