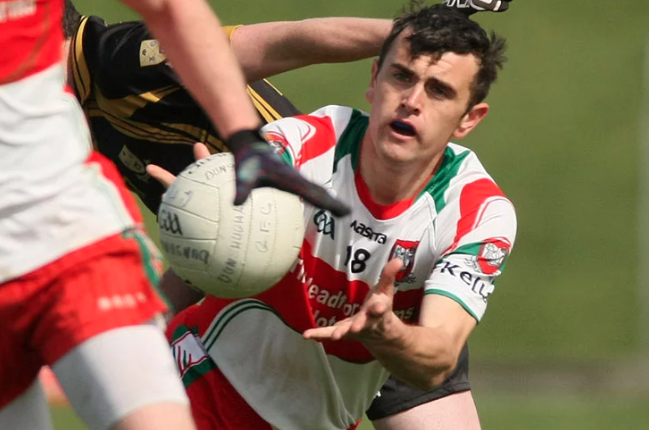 A late surge of 2-06 from Gaeil Colmcille after the resumption of the second half water break helped the Kells men to their second win in as many games over Seneschalstown in Group B of the ‘A’ League Division 1 in Grangegodden.

The Yellow Furze men started strongest and were never headed until the 29th minute of the first half. The visitors took a 0-04 to 0-03 lead inside the opening ten minutes with Fionn Reilly and Brian Hanlon (2) scoring for Kells.

A sole point from Keith Reilly was all Gaeil Colmcille had to shout about in the 17 minutes that followed as Seneschalstown pulled three points clear leading 0-07 to 0-04.

With their backs to the wall in the first half, Kells forwards hit four points in a row to take the lead for the first time with Danny McGovern getting a brace and Seamus Mattimoe and Hanlon both adding a free kick each.

Despite taking the lead in 29th minute, it was Seneschalstown who went into the half-time break in the lead with a goal and a point in first half injury time to see them take a three point lead at the halfway stage.

An early point from Seneschalstown saw them extend their lead to four. From the resulting kickout Gaeil Colmcille got the goal they needed after good work down the centre, Hanlon squared to McGovern who palmed into an empty net.

McGovern followed the goal with another point and the sides were level once again. Juat as Kells would get close Seneschalstown would pull one clear and it was McGovern who was keeping Kells in the match with accuracy off both feet. But two points from Seneschalstown saw them lead 1-12 to 1-10 as Referee Martin Dawson brought a halt to the game for a drop of water for both sides.

Whatever what was in the water helped as Gaeil Colmcille came out firing and within two minutes, a goal and a point from Hanlon saw Kells regain the lead. As the Gaeils got on top it was some heroic defending from the Kells backs including a massive block by Barry Tormay that kept Kells lead intact, three free kicks in a row and an Oisin Reilly point pushed Kells six clear and when substitute Ryan Farnham dispossessed the Seneschalstown back he pulled on the lose ball to the back of the net to ensure the Gaeil Colmcille win ahead of the championship opener against St. Colmcille’s in 10 days time.