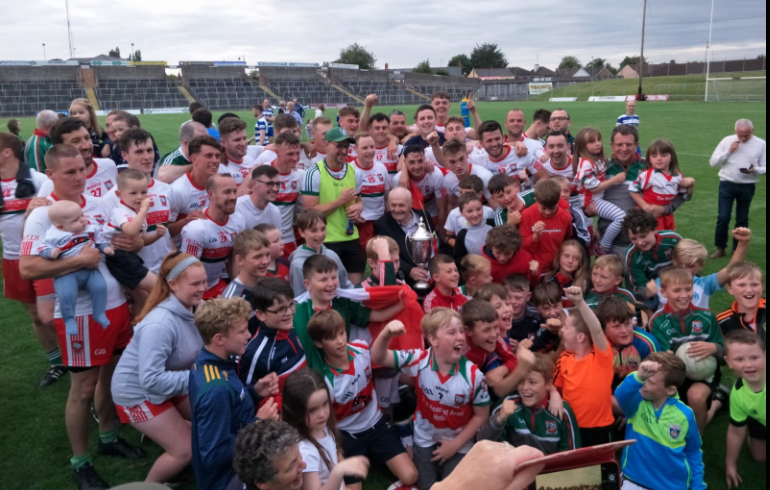 Gaeil Colmcille and Navan O’Mahony’s played out a thrilling game in front of a great crowd inside Pairc Tailteann on a glorious Friday evening for the right to bring home the Seamus Connolly ‘A’ League Division 1 Mooney Cup.

Any neutrals in the stands were treated to a fantastic free-flowing, end to end game of football. Gaeil Colmcille went in as slight favourites after beating The O’Mahony’s side twice this year already, once in the Feis Cup and in the regular-season league game.

O’Mahony’s no doubt was aware of this and came out all guns blazing and struck for 1-04 in the opening 14 minutes of the game before Kells even got settled in. Brian Hanlon looked to get Kells on the board but two missed free-kicks proved that nerves were showing in a Kells side that lost last years final to Skryne and were so desperate to do so well in this years final.

18 minutes in and Kells were on the board and who else only Hanlon to pop up in the right place after good running from Evan Sheridan and Fionn Reilly laid the ball off to Hanlon to side foot to the back of the net. Seamus Mattimoe added a free one minute later and the lead was down to three points.

O’Mahony’s stuck to their gameplan and runs from wing-back Gary O’Brien was causing problems and scores from O’Brien and Stephen Bray left the Navan side five ahead with 5 minutes remaining in the half. In the 26th minute and easily the score of the half when Kells keeper Justin Carry-Lynch took a quick kick-out which was quickly returned to him, Carry-Lynch showing true leadership brought the ball beyond the 45 and with the outside of the right boot played the ball out to the sideline on the terrace side to Hanlon who stole yards from his marker, Hanlon 45 metres from the O’Mahonys goal and cut inside, he laid the ball off to Fionn Reilly who quickly offloaded to the onrushing Conal Courtney, Courtney lifted his head and seen Hanlon continuing his run in behind the O’Mahony’s defence and fist passed in, and Hanlon gathered possession and fired left-footed to the back of the net.

Two more Kells scores from Fionn Reilly and Evan Sheridan and a late point from O’Mahony’s saw the Navan side lead by just the minimum at half-time 1-07 to 2-03 despite being in control for large periods of the game. 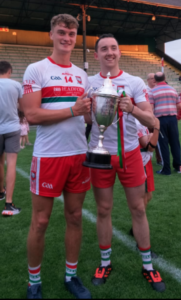 Fionn and James Reilly with The Mooney Cup

Two minutes into the second half and O’Mahony’s lead was out to five once more, scoring a goal with a well-worked move from the throw-up. Credit to this Gaeil Colmcille team they never let it affect them and responded in great fashion and two Hanlon frees and points from Mattimoe and Oisin Reilly and the scoreline was back to how it was at half-time.

In the 40th minute, Gaeil Colmcille took the lead for the first time when Kells forwards broke away and a perfect ball into Fionn Reilly from midfielder Cian Doogan was caught and laid off to Mattimoe who fired home to see The Gaeils lead by two points.

Two more points from Hanlon and Gaeil Colmcille seemed to be in control leading by 4 points heading into the final quarter of the game. O’Mahony’s never laid down and hit two scores in a row but their point in the 47th minute would turn out to be their last of the game as Gaeil Colmcille with Fionn Reilly adding a point and Hanlon hitting two points, the last a super score from under the stand to see his overall tally for the day increase to 2-06, a truly remarkable performance from an outstanding footballer.

There was still time for another free from Mattimoe in the 56th minute and as O’Mahony’s attempted to get back into the game, Carry-Lynch stood firm and keep the Navan side at bay and ensure that after 15 tough and enduring challenges spanning over 6 months Gaeil Colmcille’s name would be on the Mooney Cup.