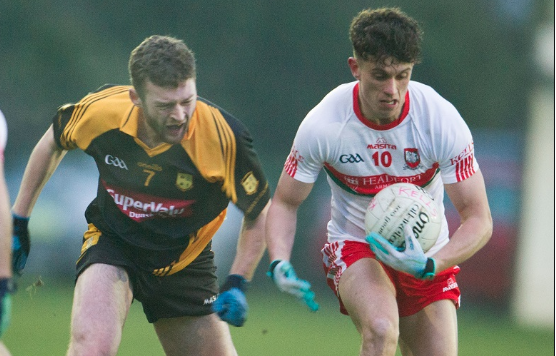 Gaeil Colmcille and Ratoath both made the trip to a wet and miserable Skryne for a place in the 2019 Feis Cup Final.

Conditions at the start of the game were tough on both sides and it was evident with some early misplaced passed and the ball getting away from players once it touched the wet slippery ground.

Ratoath would open the scoring in the 8th minute but one minute later Martin Barrett who was continuing his return to full fitness found himself through on goal but opted to level the scoring up as he fisted over.

Ratoath got the games first goal in the 11th minute when the Ratoath corner-forward rescued a ball on the end line and found a man free at the edge of the box and his handpass in was cooly finished underneath the widespread Justin Carry-Lynch in the Kells goal.

Scores were hard got and two pointed frees from Brian Hanlon reduced the Ratoath lead to one point with 8 minutes remaining in the half. Neither side could increase their tally and Ratoath would take a 1-01 to 0-03 lead at Half-Time.

Lar Wall’s men returned to the pitch earlier than the expected start and right from the throw up you could see that their attitudes had changed. Direct running at the Ratoath backs saw Fionn Reilly shoot over in the 33rd minute and one minute later, brother Oisin got on the end of a well-worked move to fire to the back of the net to see Kells lead for the first time.

Goals were crucial in such a tight game and a sublime pass from James Reilly left Fionn Reilly one on one and he finished low to the bottom corner in the 38th minute to give Kells a six-point lead. Both sides would share the next four points with Mattimoe and Hanlon pointing for the Kells men and as the game headed into the final stages, substitute Danny McGovern pointed after he did well to make himself available for a quick free.

There was still time for one more point and it would be Fionn Reilly to send Kells to their third Feis Cup Final in a row and they will be hoping to pick up their third winners medal in five years after wins over Na Fianna in 2015 and Ratoath in 2018.