By Kristina Thu 23rd May 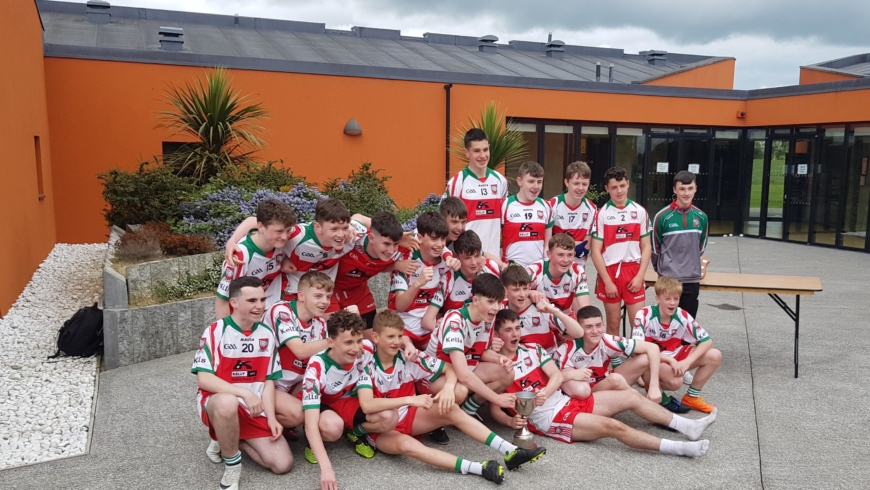 Gaeil Colmcille and St. Peter’s, Dunboyne met in Dunganny on Sunday afternoon for the O’Reilly Solicitors u16 Division 2 final.

Dunboyne registered the first two points of the game inside the first 3 minutes. Gaeil Colmcille got the opening goal of the game when Andrew Butler picked the ball out on the left flank and tore down on goal and buried to the top corner.

With the Kells forwards pressing the Dunboyne kick out the pressure told when Butler added two points along with a Jamie Jordan tagging on a point. Gaeil Colmcille got their second goal of the game when a good move put John Brady through on goal and as he shot he received a late hit by the defender, the referee allowed advantage to see where the initial shot went and lucky for Kells it looped into the back of the net.

Unfortunately for Brady it would be his last action of the match as he received a bad head injury and had to go to hospital. Dunboyne hit the next two scores and looked to have a certain goal only for goal Sean Thornton pulled off a magnificent double save to keep out Dunboyne. Butler added two more points to close out the half and see Kells lead 2-05 to 0-04 at the break.

Gaeil Colmcille got the second half off to the best possible start when, from the throw up Fionn Smith gathered possession, laid to the ball off to the on rushing wing back Ajay Tormey who played the ball through to Butler who fired to the back of the net to put 10 between the sides.

If Kells thought they could rest on their lead Dunboyne had other plans as they sprung into life and rattled off 3 goals in a row to put one between the sides with 18 minutes remaining. Kells got their fourth goal when Luke Ronan gathered a mark and played the ball down to Alex Williams on the Dunboyne 45, Williams turned his marker and headed straight for goal and finished to the back of the net. Dunboyne got another point to leave two between the sides going into the final quarter of the game. Kells pushed hard and were unlucky to not score goals when Williams and Tormey saw efforts cleared off the line. Jamie Jordan added another free and Butler hit a monster score to see Kells ahead by four points.

Kells had to call on Thornton again when Dunboyne found themselves one on one with the Gaeil Colmcille keeper but for Thornton to come up trumps again. Gaeil Colmcille got their final score when the hard working Fionn Smith pointed late on and it looked to be Kells day.

Dunboyne knew they needed goals and from a quick free the Dunboyne forward did beat Thornton but for a heroic save on the line from Cian Murphy to deny Dunboyne. The Kells backs stood firm and as they push for scores Kells threw bodies on the line with Captain Cormac O’Reilly producing a fine block to ensure the Kells win.

A fitting finish for a team who’ve been on the wrong side of an u12 final v Summerhill in 2015 and an u14 final v Ballivor in 2017 but today was to be their day.