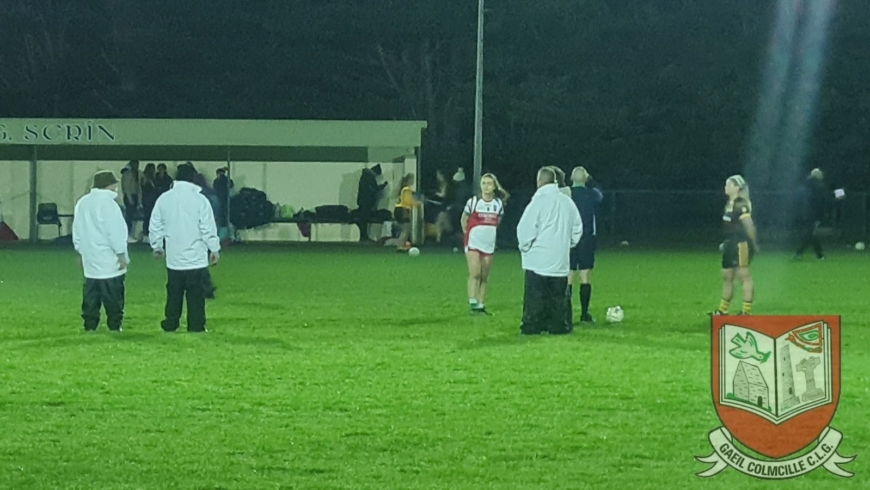 In a battle of the Gaels it was Gaeil Colmcille and Royal Gaels who met in Fr. McManus Park in Skryne to see who would be crowned Meath LGFA Junior B Football Champions for 2021.

Just before throw-in, a minutes silence was respectfully observed in honour of the late Des Ferguson who passed away earlier in the week.

An explosive start from the girls in the Black and Amber saw Royal Gaels snatch the opening two points of the game and almost looked certain for a goal but for an excellent stop for Gaeil Colmcille goalkeeper Leah Donlon.

Gaeil Colmcille nerves were settled on three minutes when corner-forward Gemma Clarke struck over with her trusty left boot. Royal Gaels restored their two point lead one minute later but Gaeil Colmcille struck for the opening goal of the game, despite an earlier effort from Orla O’Rorke that drifted just wide the Gaeils did find the back of the net when Ciara Brady found herself in space and her low shot hit the back of the net to give Kells the lead.

Royal Gaels rallied well and hit the next two scores in a row to take a a one point lead to the Water break, things could have been worse for the Kells girls only for another excellent point blank save from Donlon. Gaeil Colmcille got the perfect response when Brady found the net for the second time in the game to give the lead back to Gaeil Colmcille with seven minutes remaining in the half.

Gemma Clarke followed up the goal by striking a lovely free kick from an acute angle. The newly wed Rachel Kumar or Hanlon added another score after a well worked move saw Gaeil Colmcille move four points clear. Royal Gaels did manage to get the last score of the half to bring them within a goal at the break with the Kells girls leading 2-03 to 0-06.

Just like the first half, Gaeil Colmcille survived a scare when a high ball into square fell dangerously but for Donlon to punch to safety. The four point lead was restored when Clarke pointed from a free kick 30 yards out.

Unfortunately for Gaeil Colmcille that would be their last score of the game as Royal Gaels found their rhythm and rattled off three points in a row to come to within one point at the second half water break. Directly from the restart Royal Gaels were level and in the 48th minute the Dunshaughlin side found themselves in front once more.

With the game heading into the closing stages, Royal Gaels sealed the win when they found the back of the net on 58 minutes. Directly from the kickout the Gaels pushed five points clear and in the 60th minute referee Henri Clifford award Royal Gaels a penalty. Up stepped the Gaels forward and her low shot to the right was kept out by the Gaeil Colmcille goalkeeper Donlon to keep five points between the sides.

With five minutes of injury time played Royal Gaels made sure of the win with the final point of the game to give Royal Gaels the Championship and Junior B title.