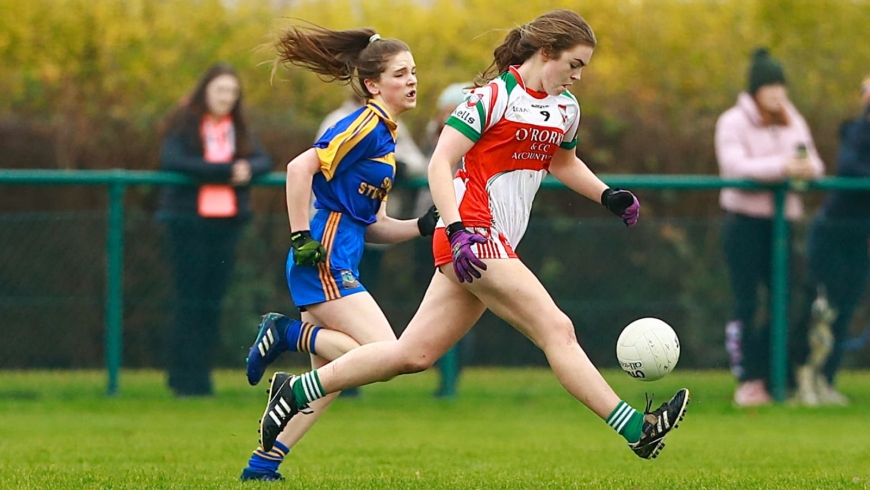 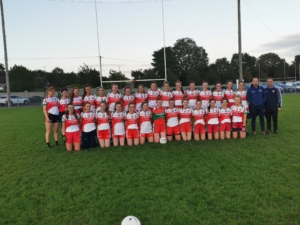 Gaeil Colmcille Ladies and Clonard Ladies met in the Semi-Final of the Kepak Junior B Football Championship on Thursday evening with the game being played in Moynalty under lights.

Gaeil Colmcille got off to the perfect start thanks to a point from a free kick by Gemma Clarke, two minutes later and it was corner-forward Emma-Jane McKeown who got in on the act as she found the back of the net to see Gaeil Colmcille take an early 1-01 to 0-00 lead

Clonard settled their nerves and started to assert themselves on the game and with 12 minutes played, Clonards full-forward Louise Coyne hit 2-01 followed by a point from Clonard’s Ella Reilly say them lead 2-02 to 1-01.

A further point by Clonard wing forward Kristen Massey who was causing problems for Gaeil Colmcille saw Clonards lead extend to five points with 13 minutes played. Gaeil Colmcille had the water break to thank in the first half as it came to the rescue as the girls regrouped and hit the next couple of scores thanks to a free kick from Clarke and a well struck goal from Full-Forward Sarah McGillick from 21 yards out to the bottom corner to close the gap to just one point.

From the resulting kickout, Clonards Kristen Massey gathered the ball on her own 45 yard line, carried it to the Gaeil Colmcille’s 45 yard line, Massey had the awareness to pick out Louise Coyne to point and extend Clonards lead to two points.

Gaeil Colmcille reduced the gap to the minimum once more when Gaeil Colmcille’s Ella Reilly fended off the attention of Chloe Duignan and pointed. That was the last score of the half for Gaeil Colmcille as Clonard finished the stronger with points from Aoife Doyle and Ella Reilly while Louise Coyne completed her Hat-Trick of goals to see Clonard take a 3-06 to 2-03 lead at half-time.

Gaeil Colmcille once again started the half strong and two points from Gemma Clarke cut Clonards lead to four points. Just as Gaeil Colmcille tried to claw their way back  Clonard always responded and this time it was two points in a row, one from Massey and one from Ella Reilly restoring Clonards six point lead.

There was controversy midway through the half when Gaeil Colmcille substitute Orla O’Rorke thought she had brought Kells back into the game when she struck the back of the net but for referee Kieran Olwell to have adjudged that O’Rorke over carried the ball to the frustration of the Gaeil Colmcille mentors. Minutes later and Gaeil Colmcille’s Sarah McGillick had a glorious chance of a goal but her effort blazed over the bar for a point.

Gaeil Colmcille cut the gap to three points thanks to two points from Gemma Clarke, but as with the flow of the game Clonards Lisa Foley hit the back of the net and a point from Ella Reilly left seven points between the sides with Clonard leading 4-09 to Gaeil Colmcille’s 2-08 with less than ten minutes remaining.

Credit to Gaeil Colmcille Ladies they never gave up as they pressed hard to close the gap and when Ella Reilly found the top corner of the Clonard net it left all with a nervous ending. With time almost up Gemma Clarke hit her sixth point of the game to leave just a goal between the sides with the Clonard kickout to come.

“One more chance” was the cry from the Gaeil Colmcille sideline and the with the most dramatic of finishes, Gaeil Colmcille’s Gemma Clarke won the kickout, found Emma-Jane McKeon with a cross field kick, McKeon found O’Rorke on the edge of the square, O’Rorke then had the awareness too pick out the onrushing Ella Reilly, Reilly struck the ball high and looked destined for the net but for the Clonard keeper Emily Heavey to produce a match winning save just as the referee blew for full-time which ensured Clonard’s passage to the Junior B Final where they’ll now face Moynalvey who overcame Blackhall Gaels in the other Semi-Final.