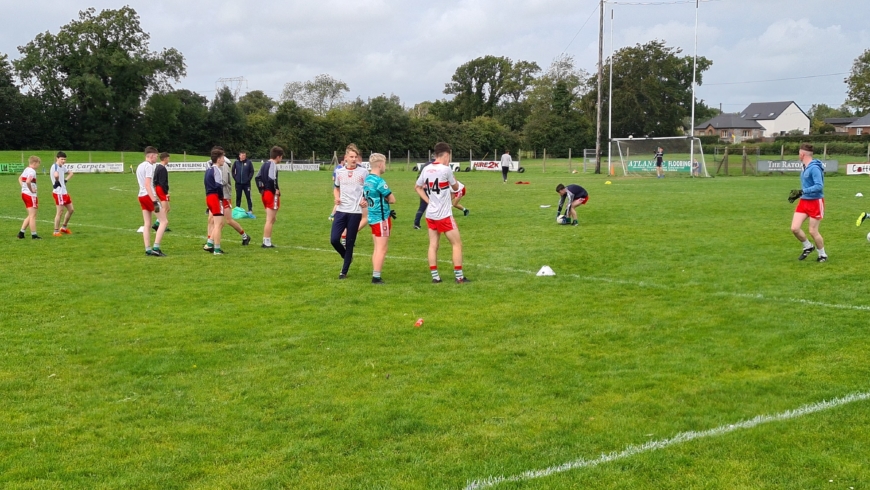 Ratoath exploded out of the blocks and looked certain for a goal only for Sean Thornton to produce a top class save to keep the game scoreless. From the resulting 45 Ratoath did open scoring as the ball dropped short and quick think thinking from the Ratoath forward pointed.

Gaeil Colmcille response was imminent as good work down the right and the ball landed in the hands of Andrew Butler and his trusty left boot levelled things up. A three minute dominant spell from Ratoath was crucial as they hit 1-03 to no reply to open up a six point lead.

A Luke Ronan free put Kells on the board for a second time in the game but it would be their last of the half as Ratoath piled on the pressure with the aid of a strong breeze. A penalty on 24 minutes that Thornton had no chance for was pivotal as Ratoath led 2-08 to 0-02 at Half-time.

Ratoath started the second half as Gaeil Colmcille would have hoped to, hitting 1-01 inside the opening two minutes. Thornton once again produced the goods in the Kells goal as another top class save kept the Ratoath goal poachers out. Butler got Kells first point of the half on 42 minutes but that was cancelled 10 minutes later by a Ratoath free-kick.

The champagne moment of the game from a Gaeil Colmcille point of view came in the 59th minute, after good defensive work from Ajay Tormey, he broke the Ratoath line and played the call out to Cormac OReilly,  O’Reilly had the vision to see Fionn Smith burst through the centre and his perfectly timed pass was finished superbly to the roof of the net by Smith.

It was all a little too late for the Kells men as Ratoath closed out the game with three further points and advance to the Shield Final.