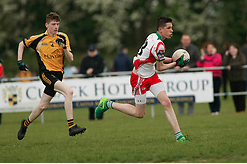 Table toppers Gaeil Colmcille and Bective/Dunsany met in round 3 of the LMFM Minor Summer League on Tuesday evening in Grangegodden.

Bective/Dunsany started the strongest and hit the opening three scores of the match before a brace of points from Andrew Butler left the minimum between the sides after 11 minutes.

The amalgamated side again hit three more scores in a row and led by four points after twenty minutes on the clock. three minutes later add the home side were back in it when Ajay Tormey picked the ball up inside the oppositions 45′ and headed up the middle and his shot landed in the back of the net to leave just one point between the sides one more time. Stand-In goalkeeper Cormac O’Reilly was performing well between the posts and his precise kick-outs were keeping the Gaeil Colmcille attacks flowing.

Bective/Dunsany hit the five of the opening six scores of the second half with Ryan O’Boyle tagging his customary point from his left boot. Tormey added a point in the 43rd minute and Butler hit a quick 1-01 to see Kells get to within two points once more.

Unfortunately for the hosts, Butlers goal would be Gaeil Colmcilles last score of the match as  Bective/Dunsany closed out the game strong hitting the final 5 scores of the match with a goal in the 52nd minute killing off any hope of a comeback for the Gaeils,