After the postponement due to Storm Jorge the Gaeil Colmcille and Ratoath re-fixture took place in Grangegodden on Sunday afternoon. 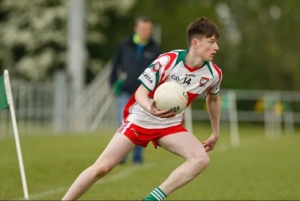 Gaeil Colmcille registered the opening score of the match when Alex Williams pointed in the 2nd minute. Ratoath, playing with the benefits of the wind in their backs got back on level terms two minutes later thanks to a free kick.

Scores were hard to come by and by the 21st minute Ratoath had increased their lead to three points 0-04 to 0-01. Kells got their second point of the match in the 23rd minute when wing forward Kevin Carpenter pointed against a stiff breeze. Neither side increased their tally before half-time and Ratoath went in 0-04 to 0-02 ahead.

Kells started the second half the stronger and had numerous chances to get on the scoreboard early but chances from Williams, John Brady and Andrew Butler failed to notch a score. With Gaeil Colmcille not taking their chances, Ratoath hit two points in a row to stretch their lead to four points. An Andrew Butler free in the 38th minute closed the gap to three points and Gaeil Colmcille should have been level two minutes later when Butler found himself one on one but the Ratoath keeper was equal to the effort to keep the visitors ahead. Ratoath should have extended their lead but for an excellent save from Sean Thornton denying the Ratoath forward.

As the Kells back held strong, a pointed free in the 57th minute put four between the teams and Kells had another glorious chance for a goal when a quick free fell to Kevin Carpenter but his goal attempt was cleared off the line to ensure Ratoath held onto the lead to see them move on to the Semi-final. For Gaeil Colmcille there was plenty of positives to take from the league campaign and they’ll move on with confidence for the year ahead.

Subs: C Donlon for Jordan, B Brecknall for Finlay