By gaeilcolmcillepro Tue 24th May 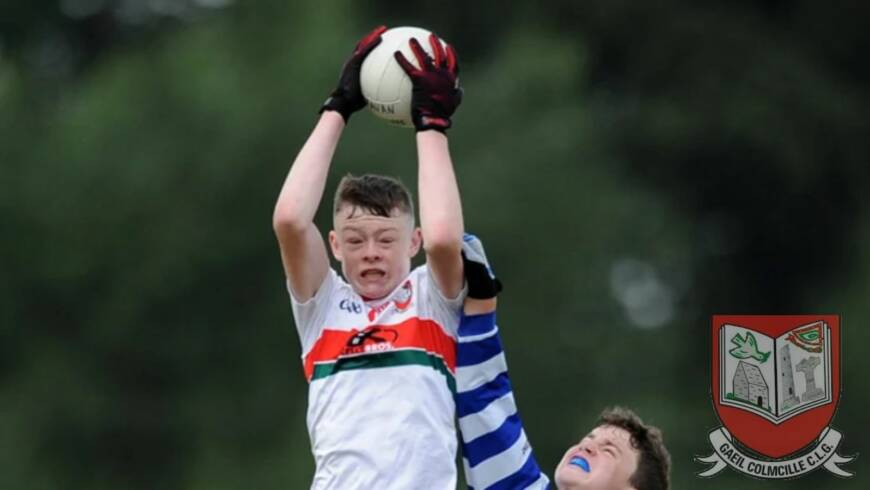 Gaeil Colmcille and Skryne Minors served up an entertaining contest in the LMFM Football League at Grangegodden on Monday evening.

In an evening where both defences came out on top, scores were few and far between. It took until the 6th minute, a free by Oisin Walsh to open the scoring for Gaeil Colmcille and one minute later Jack Hogg put Gaeil Colmcille two clear after good work from his midfield partner Oisin O’Reilly.

14 minutes in and Skryne to registered their first score of the game but Oisin Walsh got his second point after a good move involving all three of the full-forward line, Liam Barry and Callum Mitchell setting Walsh up for the point.

Skryne began to pile on the pressure, and long direct balls into the forward line was well handled by goalkeeper Conor Flanagan. Not much Flanagan could do when Skryne added the next two points of the game leaving it 0-03 a piece with 22 minutes played.

The Kells half forwards were putting in tremendous effort both defensively and in attack and wing forward David Butler was involved with taking the ball out of defence and a quick ball in to substitute Harry Flanagan and it was Walsh who finished off the score as Kells regained the lead and took a 0-04 to 0-03 into the half time interval.

Just like the first half, the second was slow to get started but when it did it was the Skryne boys who struck for two points in less that a minute to see them take the lead for the first time in the game with 37 minutes played.

With Gaeil Colmcille struggling to get a shot a goal, they would have to wait until the 43rd minute for a Noah Boshell to point to leave both sides on 0-05 each. The big moment of the game came in the 50th minute as substitute Goalkeeper Glen Gavagan was adjudged to have taken down the Skryne forward inside the small rectangle. The referee awarded Skryne a penalty and Gavagan received a black card.

Manager Justin Carry-Lynch called on Flanagan to go back into goals and the delay of the game seemed to effect the Skryne player taking the penalty and he shot wide of the post to set up a tense final 10 minutes. Almost straight away the Gaeil Colmcille half back line of Tiernan Anderson, Kilian Kelly and John Gormley attacked in search of a point to take the lead and it was the latter Gormley who got on the end of a good move to regain the lead.

A monster free in the 55th minute by Finn Tegetmeier saw Kells go two points clear despite Skryne with the numerical advantage. That advantage could be seen in the final five minutes as the visitors piled on the pressure but the Gaeil Colmcille full-back who were immense throughout the game as Bruno Griffin’s full back performance was complimented by Rian Early’s reading of the game and with Taidgh Dardis taking so much pressure off the backs with his endless runs out of defence that got Kells out of trouble on so many occasions.

A Skryne free left the minimum between the teams but as the game headed for injury time. but just before full-time substitute Conal McGovern was involved in winning a late free which Walsh stuck over to give Gaeil Colmcille the win and the all important two points.