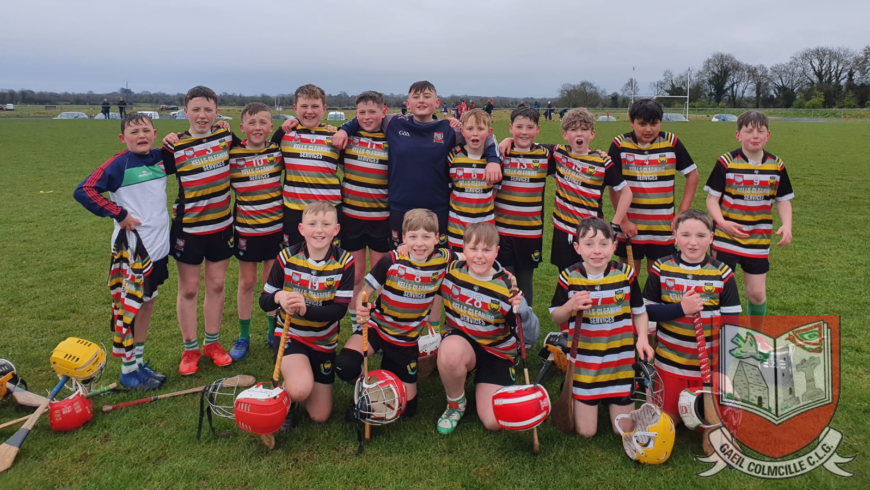 In what was far from Ideal weather conditions for Hurling in Grangegodden both sides went at it hammer and thongs from start finish.

Trim enjoyed some early scores with the Gaeils were soon to get to grips with a goal from Jamie Tyrell and another from Cillian Burke to leave us just 2 points down at half time having missed plenty scoring opportunities.

Gaeil Colmcille/Loughcrew Gaels regrouped at the break and came out fighting in the 2nd half. We were on top in every position with superb defending from Miguel Toomey Keane, Donnacha Ryan and Aodhan Early. Conor Larkin was on firing on all cylinders at midfield giving plenty supply to the forwards. Substitute Conor Thornton was hauled down in the square and calmly slotted over the resulting free.

Simon Fox was working tirelessly and his efforts were rewarded with a well taken goal. Scott Brown, Conan Clarke and Fionn Sheridan were winning plenty possession and feeding Adam Gillespie in the scoring zone. Ben Thornton in goals was hitting his puck outs with pin point accuracy.

At this point nothing was going inside the defensive line of Enda Fanning, Matthew Lynch and captain for the night Luke Dardis. Another point from powerhouse Cillian Burke and a long range effort from Donnacha Ryan which raised a green flag sealed the win for the amalgamation side.