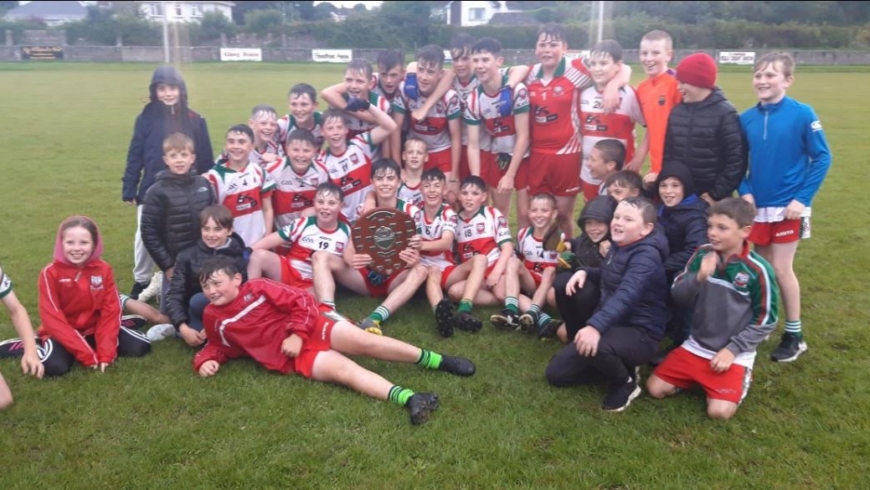 As the curtain came down on another u14 campaign, Gaeil Colmcille and St. Peter’s, Dunboyne met in the Division 1 Shield Final in Pairc Colmcille on a wet and cold Tuesday evening.

Dunboyne were out to pick up their second piece of silverware this year having previously won the Spring League Division 2 in June, while Gaeil Colmcille were hoping for their first trophy of the year after coming so close in previous competitions most notably losing the Feile qualifiers Final and the Summer League Final.

Dunboyne registered the games opening score with a fine left footed shot in the opening minute of the game. Gaeil Colmcille were level soon after when Andrew Gormley slotted over a free from 25 yards out. Dunboyne were applying all the early pressure and had the ball in the back of the net on 4 minutes to see them push three points ahead. Two minutes later and Dunboyne had a chance to increase their lead but their shot from close range was kept out by Kells keeper Sean Dardis.

Gaeil Colmcille weathered the storm and on 9 minutes were level when Liam Barry got in behind the Dunboyne backs and fired low to the back of the net to leave the game 1-01 to 1-01. Directly from the kickout, Dunboyne went the length of the field and got their second goal of the game. two minutes later and their lead was extended to four when the pointed in the 11th minute.

The final 14 minutes of the half would belong to the Kells men with two points from Gormley in the 12th and 13th minute. One minute later and Kells were ahead for the first time when John Gormley played through Andrew Gormley who fired to the back of the net.

Kells got the last score of the half when Barry picked the ball up on the end line and unselfishly squared the ball to the onrushing John Gormley to palm to the back of the net to give Gaeil Colmcille a 3-03 to 2-02 lead at half-time.

Two early points from Andrew Gormley extended Gaeil Colmcille’s lead to six points. Both teams traded scores with Centre-Forward Tiernan Anderson pointing for the Gaeils. Dunboyne looked for long balls into the Full-Forward line but Gaeil Colmcille backs Bruno Griffin and Oisin Walsh mopped up every ball that came in as Dunboyne piled on the pressure.

Gaeil Colmcille were winning the midfield battle with Kilian Kelly and Jack Hogg getting on top of their counterparts and Kells looked to have killed the game off in the 42nd minute when John Gormley pounced on a loose ball in the square and fired to the roof of the net to give Gaeil Colmcille a 8 point lead heading into the final 8 minutes of the game.

A Liam Barry pointed free pushed Kells 9 clear but a late rally from Dunboyne resulted in a well taken goal. The goal proved to be a consolation one as referee Barney O’Rourke blew for Full-Time to the joy of the Gaeil Colmcille players. A big year all round for the lads with joint captains Oisin O’Reilly and Kilian Kelly collecting the shield thanking the players parents and in particular the management of Justin Carry-Lynch and Seanie Curran for their time and effort with the team all year.