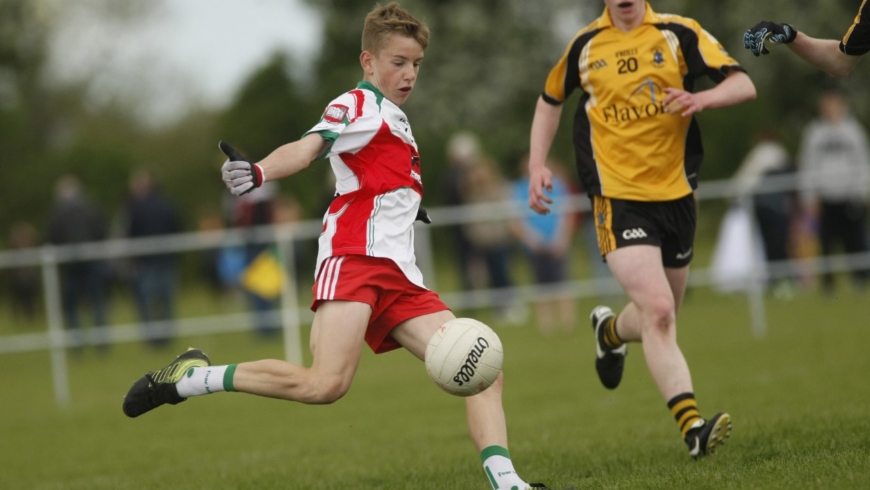 Gaeil Colmcille and Senechalstown met in the third round of the O’Reilly Solicitors u15 Football League played in Senechalstown on Sunday morning.

Gaeil Colmcille made the stronger start and good work from midfielders Kevin Carpenter and Ajay Tormey resulted in the opening score of the match with Carpenter turning the ball over in the midfield and laying it off to Tormey who popped it over. David Butler, operating at wing-forward got the Gaeils second score two minutes later with an excellent point from 30 yards out. The lead was increased to 0-03 to 0-00 on six minutes when wing-back Finn Tegetmeier slipped down the right channel and saw his shot sail over the bar. The lively start for The Gaeils resulted in Senechalstown drafting in a sweeper in front of Jack Hogg who was winning a lot of ball at full-forward.

Senechalstown soon found their range and hit three scores without response to draw the game level on 0-03 a piece with 12 minutes played. Both sides traded points with Tormey poining off his left and Gaeil Colmcille regained the lead on 18 minutes when Hogg pointed after showing good work to win the ball in front of three Senechalstown backs.  The remaining 12 minutes was all Senechalstown and the outscored the visitors by four points to one with Tormey getting his third of the half from a free to leave the home side 0-08 to 0-06 ahead at the break.

Senechalstown tried to line out with the sweeper in place for the throw up for the second half but for referee Liam O’Brien to marshal him down the field and from the resulting throw-up, substitute Finn Mullan made an instant impact and Kells went straight down the field with Aaron Glynn laid the ball off to Tormey who slotted over to reduce the gap to one point. Kells couldn’t make their pressure count and Senechalstown got the opening goal of the game in the 36 minute to stretch the lead to four points.

The game seemed all but over as a contest but manager Justin Carry-Lynch rallied the troops and Cathal Hagan found the back of the net to rally the Kells side. Butler and Tormey added two more points and wing back Kristapus Vithauskas scored a lovely point with the outside of his right foot but time ran out and it was Senechalstown  who grabbed the two points on offer.

Gaeil Colmcille still have two games remaining and they know if they win both it should be enough to book a semi-final spot.