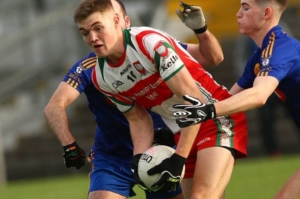 Gaeil Colmcille’s Evan Sheridan
Gaeil Colmcille welcomed Na Fianna to Grangegodden knowing a draw would be enough to see them through to a semi-final of the 2020 Feis Cup.
Conditions were tough for any footballer with a gale force wind blowing right across the pitch and it was a Danny McGovern free on 5 minutes that opened the scoring, four unanswered points by Na Fianna including two Jamie Queeney marks saw the Enfield/Baconstown outfit go three points clear with 22 minutes played. Kells did get back on level terms with two points from Evan Sheridan and a second point from McGovern to leave the sides deadlocked at half-time 0-04 each.
Gaeil Colmcille struck first in the second half thanks to a mark by McGovern in the 31st minute but three points from Na Fianna saw them lead 0-07 to 0-05 with 38 minutes played. That would be Na Fianna’s last score of the game though as weather played havoc. Kells hit four scores in a row with two points coming from Oisin Reilly, Sheridan and a fourth point from McGovern and easily the score of the match as he judged the wind to perfection shooting 25 yards outside the right upright and the ball sailed over the blackspot to seal Kells passage to the knockout stages.
Gaeil Colmcille: J Carry-Lynch, P Tormay, J Muldoon, A Browne, S Curran, L Ferguson, C Doogan, K Reilly, E Sheridan (0-03), F Ferguson, O Reilly (0-02), S Reddy, D McGovern (0-04), C Mattimoe.