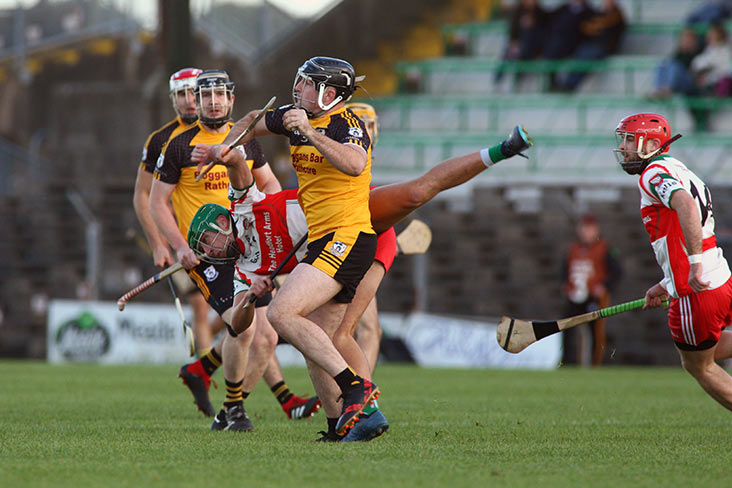 Gaeil Colmcille and Rathmolyon met in the Quarter-Final of the Uniflu Meath Intermediate Hurling Championship at a damp Kildalkey pitch on Sunday evening.

Rathmolyon, having gone through the group unbeaten went into the game as favorites and after 2 minutes they took they lead thanks to a good strike from play. If Gaeil Colmcille were to have any joy today, they would rely on Centre-Forward Fionn Ferguson’s eye being in and in the 7th minute Ferguson hit a perfect free to level the sides up. Rathmolyon responded straight away and got their second score of the match to regain the lead.

That would be “The Village’s” last score for the next 13 minutes as Gaeil Colmcille rattled off the next five scores in a row with Ferguson hitting two frees and some well worked scores coming from James Hennigan, Darren Tormay and Stephen Reddy to see Kells lead 0-06 to 0-02 after 18 minutes. Rathmolyon hit back with three scores on the bounce to reduce the Kells lead to a single point and ensure it would be a tight afternoon all round. Cormac Mattimoe hit a super point on 27 minutes to see Kells take a two point lead into the Half-Time break with Gaeil Colmcille ahead 0-07 to 0-05.

Rathmolyon who wouldn’t have been happy with their first half performance came out of the blocks all guns blazing in the second half and hit the first two scores of the half to level things up at 0-07 to 0-07. But when the Kells backs were against the walls they turned to Ferguson to keep the scoreboard ticking and two more pointed frees saw the Gaeil Colmcille get back their two point lead with 40 minutes on the watch.

A dazzling run by midfielder Keith Reilly resulted in a point for Gaeil Colmcille and one minute later substitute Danny McGovern pointed to increase Kells lead to 0-11 to 0-07 with 44 minutes gone. Just as Gaeil Colmcille thought they were comfortable Rathmolyon struck for a goal to insure the game would go right down to the wire. With the game heading into the last 10 minutes both sides traded scores with Ferguson getting his sixth score of the day.

Reilly added his second point of the match after another great run through the heart of the Rathmolyon defence saw Kells push two clear with six minutes remaining. As the clock rolled into injury-time, James Hennigan got his second point of the game and looked to have sealed The Gaeils passage to the Semi-Final. Rathmolyon did push for a goal that would have seen them force extra-time but the Rathmolyon wing-forward saw his sideline cut sail over the bar much to the disgust of the forward. From the resulting puck-out the referee blew for full-time and it would be Gaeil Colmcille who moves on to face Clann na nGael in next Saturdays Semi-Final in Pairc Tailteann. Also speedy recovery to Darren Tormay who had to go off with a nasty ankle injury and lets hope its not to serious.