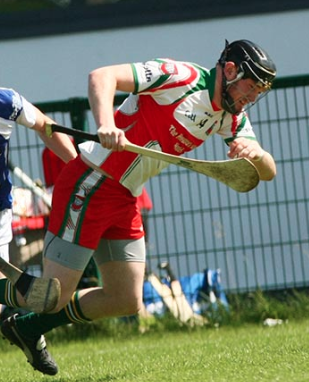 As the saying goes “You have to hurl until the last puck” and that’s exactly what Gaeil Colmcille did in Athboy on Saturday night when they came from 3 points down heading into injury time to amazingly win by four points in a thriller over a Dunderry side that like Kells lost their opening round fixture.

In a tense opening five minutes, Dunderry hit two points to Gaeil Colmcilles one point with Evan Sheridan pointing the opening score of the match. Gaeil Colmcille sharpshooter Fionn Ferguson hit the next two points in a row and by the 16th minute, Kells led by two when James Hennigan shot over with a lovely strike off his left side.

The 17th minute saw both sides exchange scores with Ferguson adding another for the Kells men. Gaeil Colmcille was dealt a blow when midfielder got his marching orders after accumulating a brace of yellow cards to see Kells backs against the walls at the end of the half. Dunderry made the numerical advantage count and hit three unanswered scores to go in at half-time with a one-point lead 0-06 to 0-05.

Gaeil Colmcille management of John Morris and Will Anderson would have said to the lads that a good start to the half was required and that the next score was crucial, that’s exactly what happened and in the 32nd minute, Fionn Ferguson pointed to draw the sides level one more time.

Dunderry responded well and hit three points in a row before Kells got level one more time when a long puck into the danger zone by Ferguson was met on the volley by Kells forward Conor Murray who fired beyond the Dunderry keeper to see the score 1-06 to 0-09 after 37 minutes.

Dunderry once again took the lead and hit two scores in a row just before Ferguson tapped over a close free to see one between the teams with 14 minutes to go, Soon after Dunderry were down to 14 men when their midfielder got his second yellow of the game and with both sides down a player Kells sensed an opportunity. Gaeil Colmcille thought the took the lead when a Ferguson sideline nestled into the back of the net but for the referee to blow for a square ball must to the disgust of the Kells supporters.

Nine minutes later in the 55th minute, that man again Fionn Ferguson drew the Gaeils level and Kells could sense an upset. But Dunderry would not lie down and by the 58th minute they would lead by two points once more and all hope seemed gone for Gaeil Colmcille,

As the game ticked into injury-time, Dunderry’s discipline was starting to cost the and Ferguson hit two frees to draw the sides level with time almost up. in the fifth minute of added time Ferguson fired in a long free from his own 21-yard line, and as it landed in and around the Dunderry penalty area, up rose Murray to catch and as he ran across the 14-yard line he buried to the bottom right-hand corner to complete the comeback for Gaeil Colmcille. There was still time for Ferguson to get his ninth point of the evening with Murray turning provider. The point being the last puck of the game as the referee blew up for full-time after nearly six minutes of overtime.