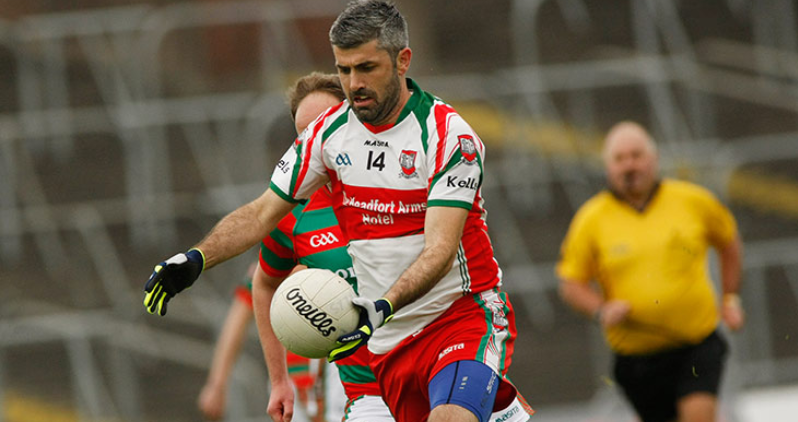 Gaeil Colmcille welcomed Skryne to Grangegodden for the second Round Robin fixture in the Division 1 Premier Championship. After losing to Seneschalstown in the first round The Gaeils were hoping to make amends against at their home venue.

Despite Skryne hitting the opening score of the game, Gail Colmcille dominated posssesion in the opening ten minutes of the game and wing-forward Cormac Mattimoe got Kells on the board when he collected a ball just inside the 45, turned his man and slotted over.

Kells were drawing fouls off the Skryne backs and Fionn Ferguson scored two of those to see Gaeil Colmcille lead 0-03 to 0-01 early on. Skryne did pull the lead back to a single point before referee Peter O’Halloran halted play for a water break.

Shortly after the restart both sides traded scores with the doyen of Gaeil Colmcille Gary Arkins slotting over a trademark left footed score. With Gaeil Colmcille squandering chances, With Kells in control, Skryne punished the hosts for not extending their lead and a score of 1-02 to no reply in a five minute period saw Skryne take a three point lead with 27 minutes played.

Arkins grabbed his second score of the match in the 29th minute but Skryne added another point to take a 1-06 to 0-06 lead at half-time.

Like the first half, Skryne grabbed the opening score but two points from Fionn Ferguson either side of another excellent point from Mattimoe brought Gaeil Colmcille back to within one point of Skryne. All of Gaeil Colmcille’s good work was undone when Skryne struck for their secomd goal of the game.

Two minutes later and just before the second half water break Skryne hit their third goal of the game to see daylight between the sides. Gaeil Colmcille substitute responded with a point but Skryne would go on to outscore the Gaeils five points to one with Stephen Reddy getting a consolation score for Kells who now sit bottom of Group B and will face Summerhill in a must win game in round 3.