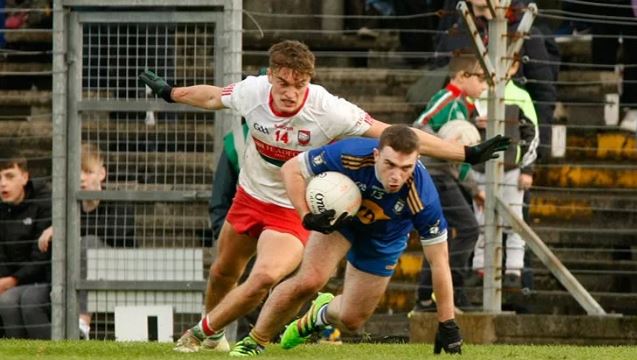 After Summerhill snatching victory against Simonstown in Pairc Tailteann, Gaeil Colmcille and Ratoath met on Sunday for the right to face “The Hill” in the Fairyhouse Steel Meath Senior Football Championship Final.

With 18 minutes on the clock and Gaeil Colmcille grabbed the first goal of the game when James Reilly fed a ball through to Martin Barrett, Barrett handed it off to Mattimoe and Mattimoe unselfishly laid off to the onrushing Oisin Reilly to palm to the back of the net. Both sides traded points with Hanlon getting his second score of the match left Gaeil Colmcille 1-05 to 0-03 after 22 minutes.

Conal Courtney replaced Liam Ferguson as a temporary blood sub and made an instant impact pointing from 40 yards out to increase Kells lead to 6 points. Ratoath struck in the 29th and 31st minute to get the last two scores of the half leaving Gaeil Colmcille 1-06 to 0-05 ahead at half-time.

Ratoath showed their intent from the throw-up for the second half when they went up the field and pointed. This was one of six points in a row and saw Ratoath take a two point lead with 39 minutes played. Gaeil Colmcille we’re struggling to get hands on ball but were kept in the game thanks to Hanlon’s place kicking and two points in the 40th and 41st minute saw the teams level heading into the final third of the game.

To win games you need a certain amount of luck and in the 44th minute Ratoath got the rub of the green when a shot was blocked by Adam Muldoon fell short dangerously in the square and the Ratoath full-forward rose highest to fist to the back of the net.

Again Kells responded and two points in less than a minute by substitute Evan Sheridan and Mattimoe reduced Ratoath’s lead to the minimum. With 14 minutes left it was Ratoath who finished the stronger and points in the 47th and 54th minute put three points between the sides and Ratoath looked to have sealed the game when they got their second goal of the game in the 56th minute to see them push two goals clear.

As Kells pushed to get scores it would be Ratoath to get the last point of the match to see them through to their first ever Senior Final. A lot of hard work and effort all year by Gaeil Colmcille manager Lar Wall and his selectors and most of all to an amazing bunch of players who gave it all in this years championship, the will now need to set their sights on a Feis Cup Final against Summerhill and hopefully finish the year on a high.