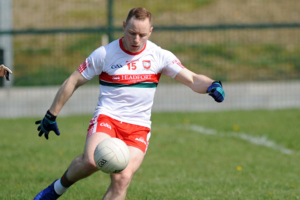 Gaeil Colmcille knew patience would be key and two points from Seamus Mattimoe pulled The Moore’s lead back to two points with 20 minutes on the clock. Kells looked certain to have the ball in the net when Mattimoe pulled away from midfield and his ball to Fionn Reilly left him one on one but he pulled his effort just wide. Five minutes later and the turning point of the half and arguably the match when good link up play from Martin Barrett, Hanlon and Mattimoe saw Mattimoe being hauled down for a penalty. Hanlon made no mistake sending the keeper the wrong way to see Kells take the lead for the first time in the game.

Gaeil Colmcille closed out the half strong and Mattimoe finished off a well worked move and a Hanlon free in the 30th minute left the Kells men with a three point cushion leading 1-05 to 0-05 at the break.

Directly from the throw up, Kells made an opening for midfielder Oisin Reilly to get on the end of a good passage of play to slot over the bar. Mattimoe followed that a minute later and with a nine point turn around Kells lead was out to five points.

Donaghmore/Ashbourne did manage to get two scores in a row but a point by Martin Barrett ensured Kells stayed four clear heading into the final quarter. A Fionn Reilly point on 56 minutes followed by a Hanlon free on 59 minutes looked to have sealed Gaeil Colmcille’s passage to the semi-final. Donaghmore/Ashbourne did get the last score of the match but the referee blew for full time to the relief of the Kells support and they can look forward to a semi-final outing v Ratoath.