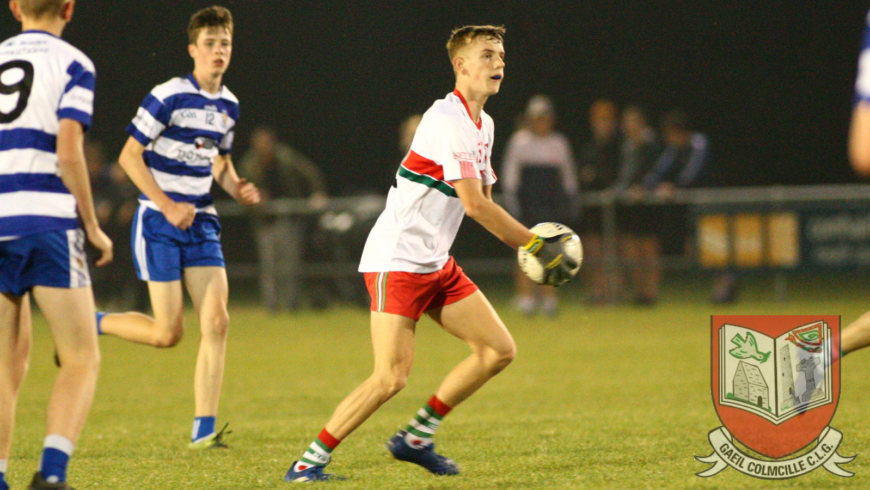 A spirited 10-minute second half spell proved the difference as Gaeil Colmcille got their Premier Championship campaign off to the best start with an eleven-point victory over Skryne in Páirc Colmcille.

While the scoreline shows a flattering win for the Kells side, it was not the case in a game that swung both ways in the first half with Gaeil Colmcille’s Stephen Reddy tapping over the game’s opening score. Skryne’s response was excellent and in the blink of an eye and only 5 minutes played they led 0-03 to 0-01 with points from the lightning bolt wing back Frank Carty, Neil Burke and a left footed effort from John Morley.

Three minutes later and Gaeil Colmcille cancelled out all Skryne’s hard work when Reddy pounced on a shot from Cormac Mattimoe that dropped short, Reddy flicking it by the keeper and although his initial effort hit the crossbar, Reddy followed up tap into the back of the net.

Once again Skryne took the lead and once again they hit three points in a row, this time two from the boot of Burke and one from Jack O’Donnell to leave Skryne 0-06 to 1-01 ahead. Danny McGovern and Ajay Tormey pointed for Kells to draw the sides level with 10 minutes remaining in the half.

Both sides shared the next four points with Aaron Browne and Mattimoe getting on the scoresheet for the Kells lads while Burke and Stephen O’Brien pointed for the Tara men. As the half ended it was Gaeil Colmcille who finished the stronger and two frees in a row, the first from McGovern and the second from Goalkeeper Barry Farrelly who’s left boot was called upon to see Kells lead 1-07 to 0-08 at the break.

Whatever was said at half time, the Kells management couldn’t have been any more pleased when Ajay Tormey came from deep and collected a ball from Mattimoe, his low shot nestled in the corner of the net for The Gaeils second goal of the game. Tormey followed that with a point off his left and two more points for Kells from Mattimoe and McGovern saw daylight between the sides for the first time.

Gaeil Colmcille got their third goal after Cormac Mattimoe tore down on goal and unselfishly, he squared the ball for McGovern to palm into an empty net. One minute later and Kells had their fourth goal and Ajay Tormey had his second, Tormey side stepped the Skryne defence to leave himself one on one with Cian Donohue but the Skryne keeper couldn’t keep out the shot and Kells lead by 14 points.

Skryne never laid down and if it wasn’t for some excellent saves by Barry Farrelly on more than one occasion the game could have been a lot closer. Skryne never backed down and hit 1-03 to no reply, Oisin Keogh finally beating Farrelly in the Kells goal.

To close the game out Gaeil Colmcille scored the final two points of the game with Liam Ferguson scoring with the outside of his right foot and Reddy finished the scoring with a similar point to give Kells all two points.