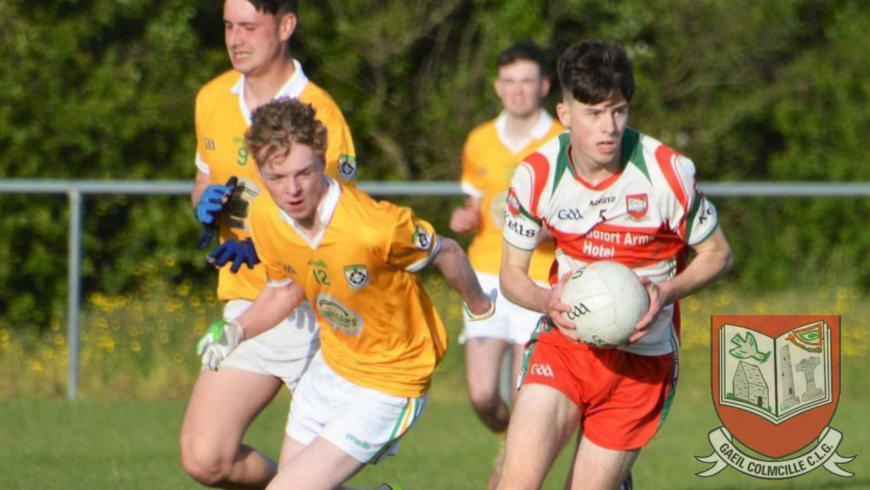 Páirc Colmcille was the venue for this Premier Championship semi-final encounter as Gaeil Colmcille welcomed Castletown to town on Tuesday evening.

Castletown enjoyed the majority of possession in the early exchanges but it was Kells corner forward Zak Griffin who opened the scoring. The visitors Castletown got back on level terms in the fourth minute thanks to a point from a placed ball.

Alex Williams who was causing havoc for the Castletown backs was forced off with a nasty cut to his upper lip after a challenge stopped him going through on goal. Griffin tapped over the resulting free to give Gaeil Colmcille the lead once more. Cormac O’Reilly extended The Gaeils lead after the wing forward broke with pace and tapped over.

The opening goal of the game came in the 11th minute after Griffin picked out O’Reilly with a beautiful cross field pass to leave O’Reilly one on one with the Castletown keeper and O’Reilly made no mistake to finish to the back of the net to see the home side lead 1-03 to 0-01 after 11 minutes.

Castletown got two points in a row before Stephen Mooney saw his fisted effort split the posts to keep Gaeil Colmcille ahead by 4 with 12 minutes remaining in the half. There would be only one more score in the half as a Castletown point pulled the game back to a one score game with Kells leading 1-04 to 0-04.

Gaeil Colmcille got off to the perfect start in the second half with Finn Mullan pointing off his left, Mullan then intercepted a Castletown kickout and Mullan saw his initial shot saved but the ball fell kindly for him to tap to the back of the net.

Substitute Gary Arkins pointed a free in the 36th minute and one minute later Kells had their third goal of the game after Sean Cleary gambled on a mix up in the Castletown backs and he dived on a ball to punch to the back of the net to see Kells stretch 11 points clear.

Castletown got their first score of the second half in the 47th minute and it came after Centre Back Niall Williams made an excellent tackle but as the ball broke loose the Castletown forward tapped into the bottom corner beyond Chris Doyle in the Kells goal.

Castletown added two more points before Arkins got his third point of the game. With the game heading into injury time referee Peter Skelly awarded Gaeil Colmcille a penalty after Kevin Carpenter was hauled to the ground. Up stepped Zak Griffin who tapped over the bar to give a nine point win and see Gaeil Colmcille advance to the Premier Division 7 final where they’ll face Trim after they defeated Navan O’Mahony’s by a point in the second semifinal.