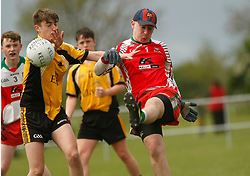 Gaeil Colmcille made the trip to Duleek on Sunday morning to take on Duleek/Bellewstown in the second round of the O’Reilly Solicitors u15 Autumn league.

Having lost to a strong Walterstown side in the first round, Gaeil Colmcille were hoping to make amends and got off to the perfect start when corner forward Liam Barry and Centre Back Ajay Tormey put them 0-02 to 0-00 ahead early on. Duleek/Bellewstown responded with their opening point before Finn Mullan, playing at Centre-Forward, got in behind the backs to fire to the top corner of the net.

Kells pressed the kickouts and their efforts were rewarded when Andrew Butler pointed twice. Again Duleek/Bellewstown scored a point but in the 18th minute Kells got their second goal when Jack Hogg fielded a high ball at the 21 yard line and laid the ball off to Harry Flanagan who calmly placed the ball under the goalkeeper.

Gaeil Colmcille finished the half the stronger and outscored their opponents 0-03 to 0-01 with Butler scoring three more points and it left Gaeil Colmcille with a 2-07 to 0-04 lead at the break.

Duleek/Bellewstown regrouped at half-time and came out a much more determined side in the second half and within 12 minutes the lead was reduced to just three points as Duleek/Bellewstown scored 1-03 with no reply, the goal somewhat fortuitous as the initial shot was well saved by keeper Sean Thornton but for the rebound to fall kindly to the attacker.

Gaeil Colmcille were creating chances but unlike the first half they couldn’t find the target. Tormey pointed in the 58th minute to reduce the score to a goal but as Gaeil Colmcille went in search for an equalizing goal it would be Duleek/Bellewstown who would get the insurance point and give the home side the win.