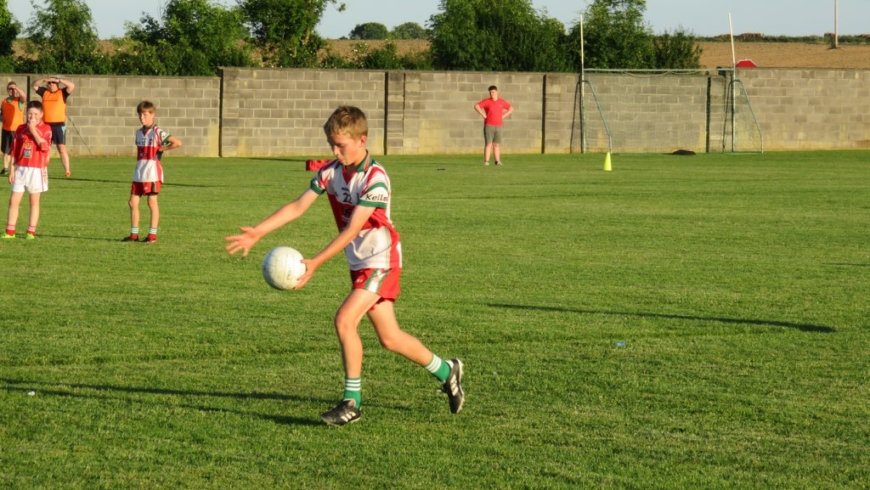 After a nail biting finish to their Under 15 tie last week and their one point win over Skryne, Gaeil Colmcille made the trip to Paddy O’Brien Park to face Navan O’Mahony’s hoping for a second win as many weeks.

There was two changes to the starting XV with the Sheridan brothers enjoying their staycation and Kells welcomed Leo Fitzgerald and Jack Byrne into today’s team. With not even a minute on the clock played, Andrew  Gormley got Gaeil Colmcille’s and the games opening point. Navan O’Mahony’s didn’t let the early start affect and straight after found the back of the net with the O’Mahony’s full-forward scoring beyond Conor Flanagan in the Kells goal.

In a frantic opening two minutes, Gormley then got the opening goal for Gaeil Colmcille to retain the lead. Navan O’Mahony’s did level things up in the 5th minute with a point from play. The Gaeil Colmcille management were forced to make a change after that point with Joe Lennon-Otteno coming on for Mickey Dunne-Thornton.

The substitute didn’t disrupt the flow of the game and Gaeil Colmcille’s Callum Mitchell pointed to give Kells the lead. In a chopping and changing first quarter Navan O’Mahony’s regained the lead just before The Gaeils restored it on 13 minutes when Oisin Walsh hit the back of the net.

Things got better for the Kells men when Byron Wearon pointed and Gaeil Colmcille then struck for the third goal of the game when midfielder John Gormley got forward and hit the back of the net. A Navan O’Mahony’s pointed free was cancelled out by a Walsh point and with 10 minutes remaining in the half Gaeil Colmcille looked comfortable.

The hosts did finish the half strong and hit three unanswered points in a row with the full-forward hitting a 45 in the 27th minute. Kells would get the last score of the half and were happy as they headed for the break leading 3-05 to 1-07.

The second half started exactly like the first with Andrew Gormley getting the opening point. Both sides traded points in the 37th minute with Walsh getting his second point of the day. A goal for Navan O’Mahony’s one minute revived hope for the home side but three points in a row by Gaeil Colmcille, two from Andrew Gormley and a second for Wearen, those scores kept the Kells men five points clear with eight minutes remaining.

O’Mahony’s were handed a lifeline in the 54th minute when the referee raised his arms and signaled for a penalty. Up stepped the Navan O’Mahony’s forward and dispatched beyond Flanagan to leave two points between the sides.

As Navan O’Mahony’s went in search for a a couple of equalising scores the Kells defence stood strong and closed the game out and it was Kells who collected the two points on offer, the lads can now look forward to welcoming Summerhill to Grangegodden for Round 4 on Saturday.